Stacking up Bricks: The Hulk

Continuing my experimentation with the Brick class for Light City...here's another important one to take into consideration that also matches one of my haphazardly rebased HeroClix that will (hopefully) soon find a place on my tabletop. 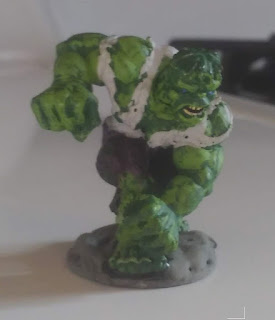 The Hulk is really one of the most classic of all superheroic Bricks, I think.  He's also fairly straightforward as far as Bricks go; he's big, strong, and tough.  I'm thinking his accelerated healing should maybe be taken into account.  He can also jump really high and far, but that's covered at least slightly in the base Brick class.  And while I don't follow Hulk comics very closely, he's apparently immortal these days.  I won't worry about that one.

As for drawbacks?  I don't know that a transformation into superheroic form is a drawback in itself; I should probably do a little survey of other supers RPGs to see how that's treated in general.