Depending on who you ask, these are either awesome or the stuff nightmares are made of.  The connection of Marvel Comics and ESPN under the Disney umbrella brings us these comic book covers highlighting some of the matchups from this opening weekend of the college football season.

From my perspective...well, they're comic book covers featuring the mascots of college football teams...so it's going to take some pretty poor execution to make them fall short of awesome.  I think I dig this one the most... 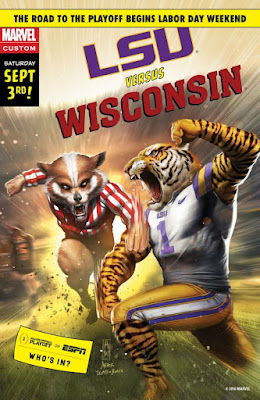 ...but I'll admit that there's something about these overmuscled anthropomorphic animals fighting over a football that I also enjoy... 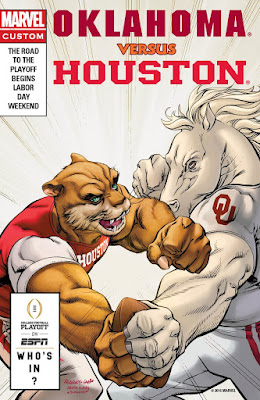 The strangest one is probably this next cover, for the Florida State vs. Ole Miss game.  I'm assuming that the sometimes controversial nature of both schools' mascots (one being a Native American, the other historically being an old southern fellow named Colonel Reb...although the Colonel has been replaced in recent years by Rebel, the Black Bear) is what led to the questionable decision to have this as the only cover featuring either a basic football player or a pair of not-so-basic crystal entities.  (EDIT:  I just got those...they're Garnet and Gold...not a terrible name for a superheroic duo, actually...) 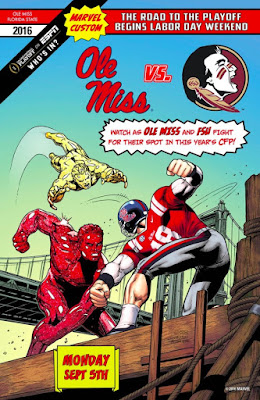 And finally, I have to include this one, since it includes a beefed-up version of Aubie (probably my favorite mascot ever).  The artists also captured the discomforting stare of the Clemson tiger pretty well... 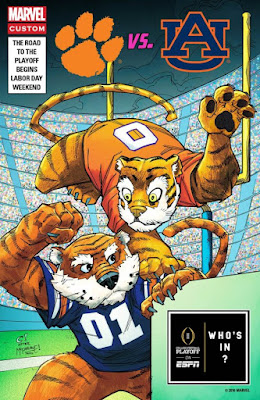 You can see all of the covers a number of places on the web...for example, here.  And if you think you recognize some inspiration from classic Marvel covers, you're right...CBR has an article with a bit more on this.
Posted by Jonathan Linneman at September 02, 2016