Rules option #2: Swords & Six-Siders (and the OSR as a whole)

Another strong option as a framework to build a MotU-inspired miniatures game on top of would be something in the realm of the Old School Renaissance.  No matter how far I stray in my interests, there are a few foundations I always seem to come back to, and the OSR is one of them.  This blog, in fact -- while all over the place at times -- was started with a thought that it would fit into the OSR community.

Since using huge D6s is one of the details I'm looking for in the rules, one of the obvious candidates would be Swords & Six-Siders, which sports a strong OSR feel while keeping all rolls down to a single D6. 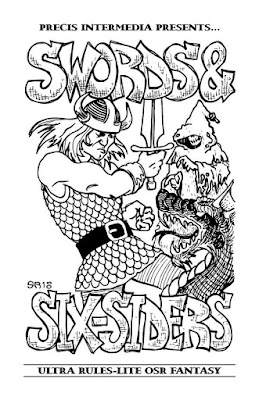 I'm sure there are other D6-only OSR efforts out there that follow in the footsteps of classic editions of D&D...this is just the main one I'm familiar with.  And while I've never played it, it looks both solid and fun.  (I'm also a fan of the generic OSR house rules for D6-based combat given in this blog post over at The Bogeyman's Cave.)

Some big advantages of going this route include the use of the OGL (and S&SS has an accompanying license, I believe) and the huge amount of material that's out there to steal use.  I could probably even leverage some of the work I put into Light City, my little Swords & Wizardry Light superhero project (that also got a LOT of material added by Justin Isaac).  After all, superhero fiction is sort of the third foundation holding up the Masters of the Universe property, along with pulpy science fiction and fantasy.

On the other hand, I probably don't want to use granular hit points in a big outdoor minis game...and I think that going this route might tempt me to also make use of a giant D20 for combat, rather than just the D6s.  That could end up being some combination of expensive and a hassle.

Still...all in all, it's a nice option to consider...
Posted by Jonathan Linneman at December 04, 2019 No comments:

In a story that has understandably been making its rounds on the web, an American entomology professor recently presented a poster showing his take on evidence for historical, and extant, life on Mars resembling our planet's insects and reptiles.  Dr. William Romoser, a Professor Emeritus at Ohio University with 45 years of service to the school, showed his work at a meeting of the Entomological Society of America in St. Louis.


On the one hand, I do think stuff like this has the potential to put wind in the sails of crackpot theorists who would love to distract us from...y'know, true stuff.  (There's definitely been some concern over the implications of such claims for the future of our search for extraterrestrial life.)

On the other hand, though, it's 2019, and we have a scientist talking about stuff that's pretty much straight out of old school planetary romance tales, and that's kind of awesome.  It's awesome because ideas like this gave us the character of John Carter and all of the fiction he would go on to inspire.  It's also awesome because I think we need a world where established scientists are willing to bring up ideas that will be widely viewed as nonsense.  Every once in a while, such a wild idea will help us see an old problem in a new way.

So...maybe the greatest takeaway from all of this is that once you're a Professor Emeritus, you don't have to give a eff anymore.

(You can search some relevant words and find a number of reports on this around the net, or just click here and see Dr. Romoser's abstract and poster.)
Posted by Jonathan Linneman at December 03, 2019 No comments: