This Day in Anthro History: Roni and the 1980 Winter Olympics

As the 2018 Winter Olympics play out in PyeongChang, we look back 38 years to this day in 1980, when the opening ceremony for that year's games took place in Lake Placid, NY (although events actually started the day before).

Representing the games that year was none other than Roni, a friendly humanoid raccoon who is as comfortable on skis as he is in a trash can...

While the anthropomorphic animal mascot is pretty commonplace these days, as far as I can tell, this was the first Olympics to use an anthro critter as the face of the games!  (Previous games had used animal mascots, but none walked/skied/skated like humans that I can find...!) 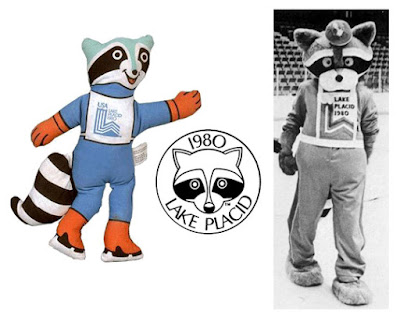 I think a raccoon was a pretty outstanding choice...it's a native animal, the mask is meant to resemble the eyewear worn by winter athletes, and the rings on the tail are a great nod to the Olympic rings (assuming that was the intention...!).
Posted by Jonathan Linneman at February 14, 2018 9 comments:

On this day in 2015, Katy Perry headlined the halftime show for Super Bowl XLIX.  As usual with her stage show, she had dancers.


Presumably using some sort of mutagenic ooze, or perhaps an advanced form of radiation treatment, Perry procured two bipedal, dancing sharks to be part of her crew.  And by the next day, one of them had stolen the internet.  The shark on the viewer's left - who has since become widely known as "Left Shark" - performed some goofy choreography (perhaps non-choreography?) that really captured our hearts that night.

Here's part of the performance in question which includes the key moves (it is worth checking out the full peformance, though; all of her dancing stuff is pretty funny):


Now, I'll be honest with you.  I didn't see this as it was occurring, and once I heard all the buzz and watched it, it was kind of hard to tell which one was the one that "messed up."  They both look goofy as anything and make me laugh a lot.  But it's the one on the viewer's left.

Anyway, this post is especially timely, as the dancer in question (presumably de-mutated at some point following the show), Bryan Gaw, has finally begun talking about that night.  Here's the piece from NPR where he explains that the goofiness was all part of the plan.  And if that's really the case...well, I'd say it worked pretty darn well!

Seriously, watch the sharks dance.  Puts me in a good mood every time.
Posted by Jonathan Linneman at February 01, 2018 1 comment: