The Biggest Thing to Happen in Gaming in 2019!

Time for me to reveal the Biggest Thing to Happen in Gaming last year!  For me, that is.  Not for the world at large.  Or...actually, it's somewhere in between.  This is the thing that had an impact on the scene that is gaming (all of it...computers, cards, dice, meeples, rock, paper, scissors...I'm treating it all as one big entity) that also had a big impact on me.

So it isn't something like, "I randomly ran a WEG Star Wars adventure for a couple of friends from work, and it was a blast."  That was a big event for me, but had little impact on gaming as a whole.

It also isn't something like the release of Fantasy Flight Games' Marvel Champions: The Card Game, which looks to be a highly regarded addition to the customizable card game family, with a killer license, awesome production, and lots of fans.  I think it'd be something that's right up my alley.  But...I've never played it.  I think it's big, just not for me.  (Yet, at least.)

Nope, it's somewhere in between those two.  And...it's a tie.

1A:  The rise of Oathbreaker 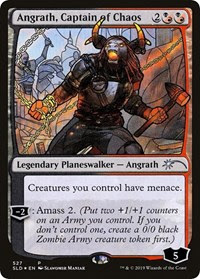 While it had been around for a couple of years, it wasn't until 2019 that most of us in the Magic: The Gathering-playing world heard of Oathbreaker, a variant of the Commander/EDH format that uses a Planeswalker card as the leader of your deck, along with a single "signature spell" that they can cast when on the battlefield.  It uses 60-card decks and 20 life, can easily be played 1v1 or multiplayer, and is flavorful, fun, and often fast enough to be completed over lunch.  The last two years have seen me venture back into MTG after going too many years getting in too few games, and Oathbreaker has really caught my attention as a format of choice.

It gained a lot of steam this year.  (The Planeswalker-themed set War of the Spark surely helped!)  I suppose time will tell if it has the staying power of its "parent" format, but I definitely think there's a possibility it will.

1B:  The rise of auto battlers 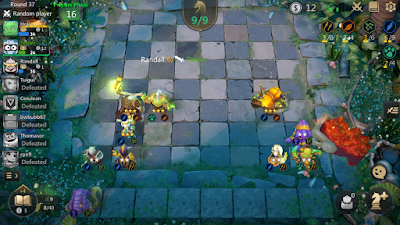 When I was much younger, I really enjoyed video games and was often looking to play the next big thing.  However, it has been a very long time since I have been anywhere close to actually playing the next big thing.  Somewhere around the end of the era that people talked about how many bits were in their consoles, my fingers quit understanding the way modern video games worked.  I've always paid some amount of attention to the video game industry and the popular games at the time, but other than digital card games (which I generally love, but whose video-gameyness could be debated), I've rarely played them.

Then came Auto Chess.  Born as a mod for the MOBA Dota 2 (and apparently somewhat based upon an old Warcraft 3 custom map involving battling Pokemon), Auto Chess spawned an entire genre of game (the auto battler) in which players spend round after round building a team to fight one of the other competitors at random until just one is left standing.  I'd try to give more detail into how these games typically function, but whenever I do, it just makes them sound like a weird exercise in resource management and matching like items, which...I guess they kind of are.  I really have very little idea how to explain why these things are so addictive, but I can tell you that as soon as I finish one game, I'm pretty much ready to start the next one to see if a good strategy holds up or if I can improve upon a bad one.

There's a good bit of info out there on the net for these games.  The biggest names in the genre are probably Teamfight Tactics (using League of Legends characters), Dota Underlords (the official Dota entry), Auto Chess (made by the creators of the original Dota mod, and the source of the picture above), and Hearthstone Battlegrounds (a more recent entry that builds on the card game's engine).  I also have a big soft spot in my heart for Chess Rush, with its fantastic Turbo (shorter contest) mode.
For the first time in...decades, probably...I was playing a non-card-based video game that was the buzz of the gaming world.  Although...the genre is arguably about as close to being a card game as a "true" video game can get without actually involving digital cards.  A discussion for another time, I suppose.