Want to build a city with me?

I guess I cursed myself when I wrote that my free time hasn't been especially limited lately, because pretty much since I pushed the button on that post, it's been exactly that.  I've been aiming (heh) to finish The Marksman class for Light City for weeks at this point, which is kind of ridiculous when the point of the class-by-class approach to Light City is to facilitate progress on the project even when time and focus is limited.

But y'know what probably doesn't make for a quality blog post by me? Blogging about not blogging! So, here's the point of this little communication, the thing I actually have been able to accomplish lately...!

I present the Light City Multiverse logo with the hope that others will want to take part in this little experiment in playing with superheroes within the Swords & Wizardry Light framework.  You see, I have some pretty specific ideas in my head of the way I expect the rules regarding Light City to shake out (kind of the reason I see it even being a worthwhile pursuit when there are already a million and one other supers games out there), as well as a certain view of the "ideal" superhero gaming world.

There's no point in pushing all of that too hard though, unless I'm putting it all together as some huge rule and setting book, and one of the things I like the most about this hobby of ours is seeing ideas from different individuals bounce off of each other to make something even better.  And really, what background is better for letting disparate ideas intermingle than a superhero multiverse?  I thought for a while that it might be a bit pretentious to release a "compatibility logo," but hey, what have I got to lose?  Hopefully others will want to play in the sandbox!

Here's the first version of the logo that I've been somewhat pleased with.  It's followed by the license (using that word pretty loosely) and the logo with inverted colors.  Please come join me in Light City if you like!


1.  The Light City Multiverse logo may be used freely on any work that contributes to our ability to pretend like we’re superheroes using the Swords & Wizardry Light ruleset.  You can also use it on other stuff, but this is probably where it makes the most sense.
2.  Use of this logo does not indicate that you relinquish ownership of any of your own physical or intellectual property.  Similarly, making this logo available for use does not indicate that we relinquish ownership of any of our own physical or intellectual property.
3.  While not a requirement, if you do use the logo (or make anything of interest to Light City), we’d love to be notified at lightcityrpg at gmail dot com.
4.  Light City is a big, multiversal sandbox with room for a lot of people to play.  We reserve the right to ask you not to use this logo anymore if you’re not playing nice.
5.  As you’ve probably guessed, the writer of this license not a lawyer, so we’ll just make a final general statement that we reserve the right to change this license and the logo itself.  If for some reason that has legal ramifications, we’ll all figure it out at the time.

EDIT:  Oh!  I should give a shout out to the source of the skyline art in the logo.  I snagged it from Pixabay, right here.  Thanks to user Clker-Free-Vector-Images (probably not their real name) for posting it there...!
Posted by Jonathan Linneman at July 28, 2017 9 comments:

Building the infrastructure of Light City...

While my free time isn't especially limited these days, I am finding that I rarely have a significant stretch of uninterrupted time to complete the little projects I have bouncing around in my head.  So while the next Light City installment is taking way too long (The Marksman is coming soon...!), I am taking little steps in working toward some of my hobby goals.

I recently made a stop at Home Depot to pick up an important item... 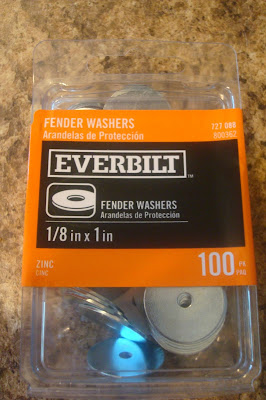 I'm pretty stoked that I can now continue my (years-long) quest to put some of the random HeroClix I've accumulated over time to good use...! 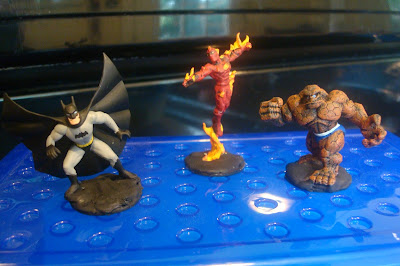 Some more critters drawn by my pal JR Mounts for summoning, Duel Masters-style, by the Card-caster class.  (You can see more of his creations in my Monstrous Monday posts from the last three weeks...!)  HD is in the upper left, AC (ascending from 10) in the lower right... 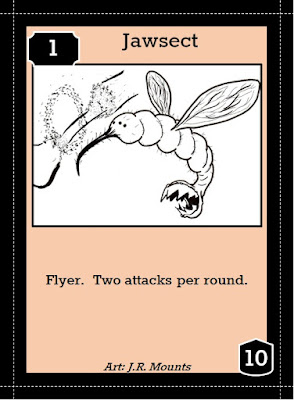 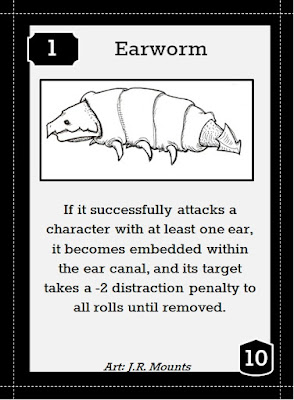 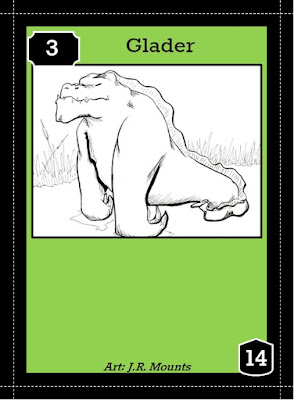 I was supposed to finish this post yesterday, but a combination of work and celebration got in the way.  Ah, well...Happy (belated, now) Fourth to all of you who appreciate the freedom you've been gifted in your respective homes!

Naturally, at a time when Light City is always rattling around in my cerebrum, America's Independence Day makes me think of this guy... 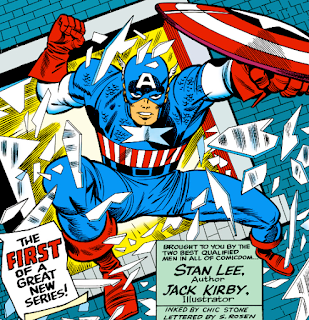 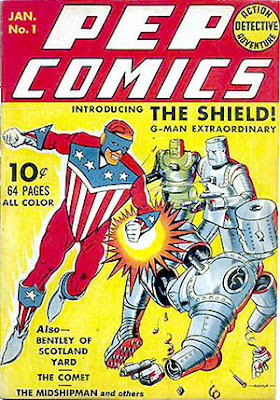 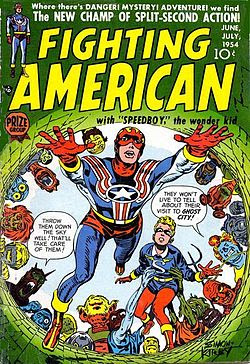 So...let's also talk about Supersoldiers, shall we?  As I move through through the superhero archetypes (as I see them applying to RPG classes, anyway) for Light City, I 've known that something in the vein of Captain America needed to be included.  As with Batman, exactly what that is depends on the perspective you take in thinking about Cap.  You can focus on the patriotism, of course, making him an inspirational symbol.  When I included a red, white, and blue hero in my Dogwood City project last year, for example, I gave him a little ally-buffing ability.

You could also zero in on the way Cap handles a shield, which may make him a member of the Marksman class (the next one I hope to release for Light City).

For some reason, though, I'm drawn a bit more to Cap's basic power set...just that he's a badass fighter at the peak of (or just beyond) the normal human physical max.  I think part of it is that I think of DC's closest Cap comparison to be the guy who has somehow become one of the company's showcase villains over the past several years... 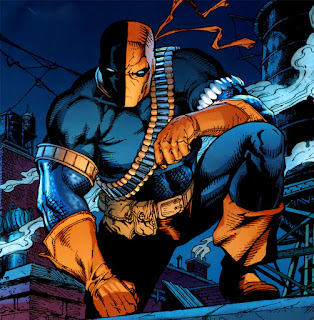 A Deathstroke/Captain America class should be easy enough, right?  I'd say so.  So easy, in fact, that it's pretty much already there in Swords & Wizardry Light...they're really just high-level, high-stat Fighters!  So how do I make this jibe with my goal of making Light City classes roughly comparable in power level to the basic SWL options...?

I've been thinking a lot about Light City power level after some thoughts from commenter X-Plus Kaiju Collectors Crew on my last LC post, and I actually really like where all of this has led me.  It seems reasonable to me to trade off the multiple attacks vs. 1 HD enemies that Fighters get (which I honestly find a little awkward because the player basically needs to somehow be aware that an enemy only has 1 HD...) to give a Supersoldier a stat boost.  Maybe even +1d6 to all the physical attributes...and probably INT too.

The beauty of putting an adjustment like this into SWL is that I could see it making a basic character feel pretty super...but the actual stat benefits are small enough that it really wouldn't break anything!

I should probably stat up a few characters at some point, along with exploring what a "basic" Fighter would actually look like in the Light City Universe...
Posted by Jonathan Linneman at July 05, 2017 3 comments:

Even more of the beasties created by my pal JR Mounts for summoning, Duel Masters-style, by the Card-caster class.  (You can see more of his creations in my Monstrous Monday posts from last week and the week before...!) 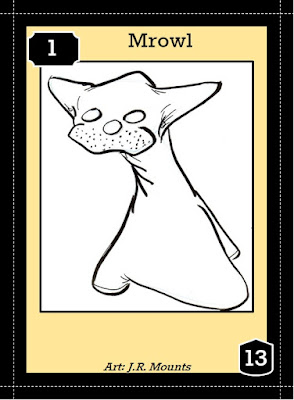 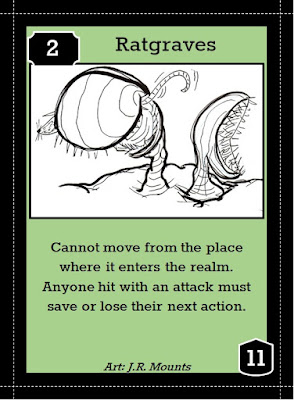 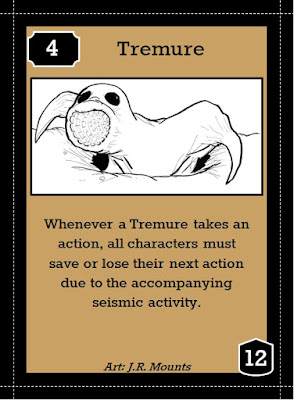 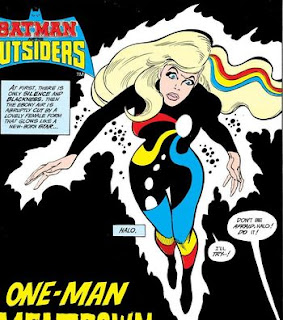 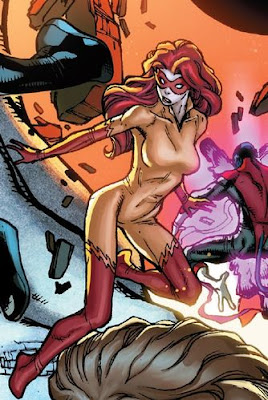