Today's intersection of ska and geekdom comes courtesy of Jeremy at Skatune Network...who has to be one of the most musically talented individuals I've ever paid attention to.  They've done some outstanding work on the channel, but this one is just top-notch.
And in me-related news, quite a while back I picked up a couple of miniature Pokemon figures that looked to be roughly in scale with the HeroClix I've been planning to rebase and play with for forever.  One is one of my all-time favorites, Electabuzz: 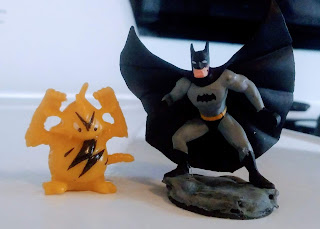 It's a little big...the average Electabuzz is 3'07" (1.1 m), so especially considering that Bats is a little on the tall side for the minis I'm collecting...anyway, I'm gonna go with it.
Way back when, I played around a bit on this blog with converting old school Pokemon cards to old school RPG monsters using a quick and dirty formula:
HD = Level/10 (round up)
HP = TCG HP/5
Attack bonus = HD + 2 - [attack cost in energy]
Attack damage becomes damage in d6 (divide by 30 and treat remainders as modifiers)
AC = 14 - Retreat Cost (related to DEX...?)
Resistance halves damage; weakness doubles it.
Specials will hopefully be obvious.
So, this card... 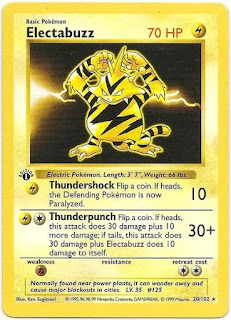 ...becomes this monster:
Electabuzz
HD 4 (14 HP), AC 12
Attacks:  Thundershock +5 (d6-2, 3 in 6 chance of causing paralysis for one round), Thunderpunch +4 (d6, 3 in 6 chance of +1 damage, otherwise deals 1 damage to itself)
Weakness:  Fighting
Electabuzz and Batman will hopefully meet on the field of battle before long.  I should probably put Buzz on a washer.
Posted by Jonathan Linneman at January 16, 2021