Where does 1d6 skill resolution originate? 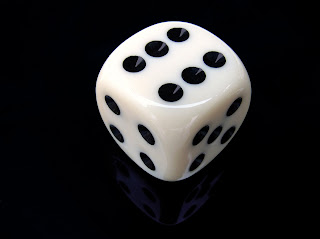 In finally following up a bit on exploring some sort of OSR-based framework as a basis for the action figure combat game I'm currently calling Project 5.5, I've realized how much I like the idea of "X in 6" task resolution in games.  As in...the door to the next room of the dungeon is stuck, I have a 2 in 6 chance of opening it, I roll a 3, it's still stuck.  I suppose Lamentations of the Flame Princess is the main system I've ever played that used it extensively, and while I'm not all-in on skill systems that don't modify the required roll according to the specifics of the situation (an issue that's easily remedied, of course...and I don't doubt LotFP actually has some guidelines for this), there's just something about the simplicity of rolling a regular old d6 and knowing you need to hit a target number or lower to succeed.

For one thing, there's something about it that feels really old school to me.  And I don't really know why that's the case.

I think I've noted on this blog before that I didn't play most of what we now think of as "old school" RPGs during their first run in the spotlight.  I didn't really become what I'd call a tabletop gamer until a bit later in life than many of my current gaming friends and acquantances, essentially cutting my roleplaying teeth on Risus and 3rd/3.5 era D&D.  Well...maybe Risus is kind of old school.  It is not, however, old school D&D, which is clearly the shared DNA that connects most of the OSR.

In other words, it's not like I enjoy those 1d6 roll-under checks because they remind me of the way I used to game way back in the day.  And so I started wondering recently...where does that feeling that "X in 6" fits my idea of old school gaming come from?  Is it just because LotFP, one of my favorite retroclones, uses it for skills?  Is it the ad hoc nature of an "X in 6 chance" declaration that makes the system fit into the "rulings not rules" mindset I associate with old school gaming?

I really don't know...AND I'm legitimately looking for insight from anyone reading this into (1) whether I'm alone in thinking this sort of task resolution feels very old school for some reason, and (2) where this may originate.  I'm pretty sure I'm not alone, as it seems I've come across its use quite often in the OSR realm, including complete approaches to implementation like this one over at the blog Blood, Death, Satan, & Metal.

Where it originates is a bit trickier.  I've found where the work has been put into demonstrating how "X in 6" is built into B/X D&D.  But was it found much in the three OD&D booklets?  Did early modules influence its use?  I'd definitely like to find out a bit more about the roots of these rolls...!
EDIT:  I realized later that at one point in time, I did seem to be aware of the fact that "X in 6" shows up in the original three booklets of D&D.  Clearly, I didn't internalize that info very well (and I'm not even sure how I came to the understanding I did).  And maybe...the old memory isn't what it used to be...
Posted by Jonathan Linneman at February 18, 2020 2 comments: