New in Light City: Welcome to The Assembly!

I'm very happy to announce that there's a new Light City product available for download on your favorite OneBookShelf storefront:  The Assembly! 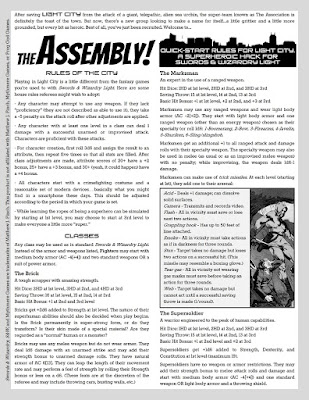 The Assembly is a two-page add-on for Swords & Wizardry Light that stays true to the original SWL philosophy of encouraging quick-start play by covering just a few levels.  You can print it out and tuck it inside your SWL folder to make it just about as easy to get a supers game going as a traditional fantasy outing.

This new release includes work by +Justin Isaac as well as my usual rambling.  It covers three new classes (The Brick, The Marksman, and The Supersoldier), some modern and comic booky weapons, and a bunch of baddies that fit the four-color theme.  You can even use it to play some of your favorite cinematic heroes, should you be so inclined.  And of course, it's free!

I hope you'll check it out and let me know what you think if you get a chance!
Posted by Jonathan Linneman at January 18, 2018 6 comments:

Elemental Week continues!  Just another set of stats for a mini I'm looking to put onto the Light City tabletop... 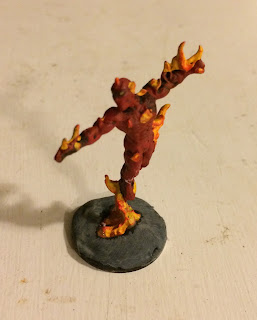 (Like Hal Jordan, original Fantastic Four member Johnny probably doesn't need much introduction, but here's a link to his Marvel Database page for reference.  Hal and Johnny would be a fun pair to put together in a story, actually...

Ah!  Here's a cover for a GL/FF story that Ross posted over on the amazing Super-Team Family blog...!)
Posted by Jonathan Linneman at January 16, 2018 2 comments:

It might turn out to be Elemental Week here at Monstrous Matters!  Just statting out some characters that are on my mind or haphazardly transplanted from Clix bases to put on the table for Light City... 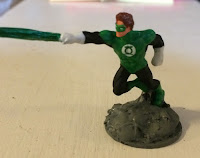 (Hal probably doesn't need much introduction, but here he is at the DC Database.  Also, I snagged his stats from Taliesin's Mutants & Masterminds builds at the Atomic Think Tank...!)

So, I've had this running through my head for a bit...really just a fun thing to ponder, but I actually think it would be a cool exercise to carry out at some point.

What if you took all of the superheroes out there, put them into a pot, and allowed the major comic book publishers to draft their rosters in the manner of American professional sports leagues?  (I'm sure some leagues in other countries do it, too, but it's more of an American phenomenon, as far as I know...)  To make it interesting, we'd let more than the Big Two in on it...maybe five or six entities...or hell, a hundred, since this is all hypothetical anyway...could choose their group of heroes to publish.

If you were in charge of choosing, how would you go about it?  Do you just pick the most popular characters out of what's available?  Your favorites?  Do you go for synergy above all?  Do you pick a theme and look for consistency?

There are a lot of fun wrinkles to consider.  Once you pick a member of the X-Men, do you feel the need to lock in mutant prejudice as part of your world?  If you first-pick Superman (one of the obvious top picks, I think), does his power level limit your choices the rest of the way?

And who would be the first character outside of Marvel and DC that's worth picking?  Spawn?  Hellboy?  Faith?  Popeye (sure, he's in there)?

There would have to be some specific ground rules that I haven't really ironed out...doesn't seem like it would make much sense to let someone have, say, Superman, but then let Supergirl go somewhere else.  Green Lanterns and the Fantastic Four present issues that would have to be addressed.  Those details are part of the fun of thinking about this, though.

From where I stand, there's really just one obvious first pick, no matter your overall strategy:


Probably the most popular superhero (and maybe the most popular fictional character) on the planet...extremely adaptable...doesn't have powers that warp the rest of the world...it's hard to see why anyone would choose anyone else.  Even if no members of the Family come along, Bats is worth it.

In my mind, it gets a lot hairier after that, though.  Based on my vision of an ideal superhero universe, with nods to both popularity and my own favorites, this is how I'd rank my top ten picks (at the moment, anyway)...