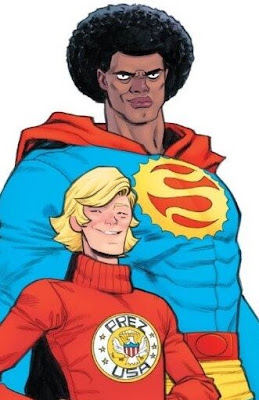 Without any evidence to the contrary, I'm going to assume Sunshine Superman has access to all of the standard Supes powers...and I'll take this opportunity to stat him up for Light City in such a way that I can use the basics for any old Superman in a tabletop superhero skirmish.  Maybe I can even figure out a way to reconcile these numbers and abilities with a rational way of having the Brick class play out over several levels...
Sunshine Superman
Level 5 Brick
AC 6[13]    HD 6d6+6 (28 HP)
Saving throw: 12
Move 24 ft. (flight 24 ft.)
STR 30(+4)    DEX 12    CON 18(+1)    INT 14    WIS 12    CHA 14
Attacks:  Melee - Punch +2 (1d6+4 damage); Ranged - Heat Vision +2 (1d6 damage), medium range
Vulnerability:  Kryptonite
Brick bonuses: Super Speed x1, Flight, Energy Blast.  Thanks to Justin Isaac and his Super-Pet class for helping me visualize this method of building a hero in a Light City context, and to soner du for confirmation that "exaltations" to build a hero isn't a terrible idea...
Posted by Jonathan Linneman at January 11, 2021