In a World Where Bricks Rule...

I recently posted some pics from a Lego battle I took part in a couple of weeks ago, intending to post the rough rules that we played by on this blog.  Well...here they are...v0.5 of In a World Where Bricks Rule..., a super-simple, icosahedral set of skirmish rules that are ready to be added to, subtracted from, and just generally screwed with.  I first posted them to the web a few years ago, so maybe, just maybe (but probably not), there's someone out there who still has designs on playing it at some point.

Big thanks to my buddy JR Mounts for the awesome artwork.  I've worked with JR on the card games Ghoulball and Cop Salad.  He has a website where you can see samples of his comic work.  (There are some great stories about a fried pickle private investigator in a noir setting that...well, you kinda have to see it...) 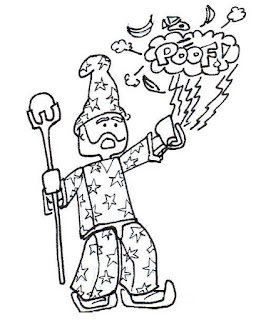 In a World Where Bricks Rule…

Life is a constant battle. Or something kind of like a battle, anyway.  These rules will show you how those kind-of battles play out.

Level – an approximation of the character’s combat ability and toughness.

Class – lets you know what special abilities the character has.

Defense – how hard it is to hit the character with an attack.

Range – indicates whether or not the character is able to attack characters with which it is not in contact. A character either “has range,” or it doesn’t. 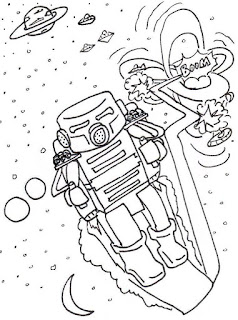 1. Pick out a figure to represent the character.

2. Determine the character’s level and class.  Just pick a level that seems appropriate; you’ll want each side to have about the same number of levels when all characters are added together.  Classes are listed toward the end of these rules (or feel free to make up your own).

3. Figure out the character’s defense value. This is typically based on the type of armor or protective clothing worn by the character, so feel free to outfit them with some extra equipment if you want. Higher defense values make a character harder to hit. Here are some examples to use as a guide:

4. Finally, give the character a weapon. Most characters won’t deal much damage without one.  It doesn’t have to be a “real” weapon; it could also be a wrench, a crowbar, a bat…whatever. If the weapon can be used from a distance, like a gun or crossbow, note that the character has range. 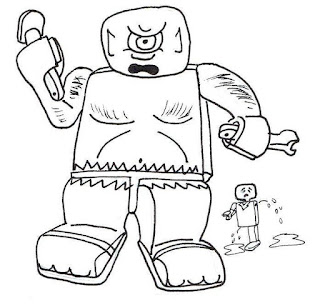 To begin each round, one player rolls four six-sided dice (4d6). All characters with a defense value less than or equal to the roll can act this round. Players (starting with the youngest) take turns activating one character at a time. When all characters have acted, a new round begins.  Characters can take two actions when activated.  They may move, attack, or perform an action indicated by a special ability. Characters may also leave any actions unused.  To move, a character is moved up to one full length, in a straight line. A length can be any convenient distance agreed upon by players and reasonable to the size of the figures. (For conventional brick figures, a 16-stud brick is pretty useful.) A character cannot move through or over tall objects (including other characters). Moving through difficult terrain (swamps, thick brush, etc.) requires two move actions to be spent for each move performed. If a character is in base contact with an enemy, one move action must be spent to break free. A move action may also be spent to pick up a weapon or other item, or to climb onto an object.

When a character has sustained hits equal to or greater than its level, the character is knocked out and removed from the battle. The battle ends when only one side has characters remaining or when an agreed-upon objective is completed (such as capturing a base). 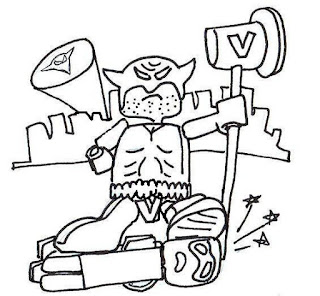 Archer: +3 to attack rolls with a bow or crossbow.

Brute: Deals an extra hit when an attack is successful; can sustain one extra damage before being knocked out.

Ninja: Ninja are assumed to carry shuriken and can be given a ranged attack even if they do not appear to possess a ranged weapon (no penalty to melee because of this).

Soldier: Subtract 3 from defense for activation purposes; +1 to attack rolls with a gun (firearm, blaster, etc.).

Space Trooper: Can move using a jetpack (or a magic ring or something) – not affected by terrain or characters that would block its movement.

Swordsman: +3 to attack rolls with a sword.

Undead: When knocked out, may still activate each turn by rolling a d6. On a 1 or 2, the Undead comes back at full strength and can be activated immediately.

Vigilante: When it hits with a melee attack, the hit character drops its weapon.

Wizard: As an action, you may roll a d6. On a 1-3, a character within one length takes a hit and can’t act this round. (Can only be used once per round.)

Posted by Jonathan Linneman at February 20, 2016 No comments:

Email ThisBlogThis!Share to TwitterShare to FacebookShare to Pinterest
Labels: In a World Where Bricks Rule, JR Mounts, Lego, microgames

I was thinking today how interesting this could be as a supplement for White Star (or X-plorers, or Terminal Space, or Starships & Spacemen, or any other OSR space exploration game).  Instead of going big, why not go very, very small?  (Maybe I should make a bestiary of bacteria, viruses, and components of the immune system.)  In the tradition of Fantastic Voyage, Innerspace, and that Batman: The Brave and the Bold episode where Aquaman and the Atom travel through Batman's blood... 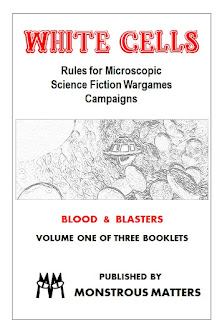 Posted by Jonathan Linneman at February 17, 2016 No comments:

Just some pics of Lego men at war...

Last weekend, after playing in my first ever session of Lamentations of the Flame Princess (thanks Ted!), I got a chance to play against my buddy William in an endeavor I hadn't undertaken in a while:  Lego gaming!  We used a ready-to-be-modified-on-the-fly version of the In a World Where Bricks Rule... ruleset that I put on the web a few years ago.  It's a really simple, d20-based game that I'll get around to posting on this blog at some point (hopefully this week!).  The lighting isn't great on these, but...whatever, I like looking at them!

The factions entered the area from two different directions... 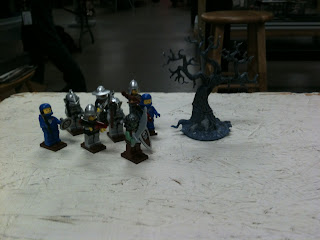 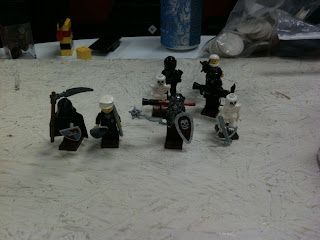 ...with the goal of securing and defending this...stargate...type thing.  Some skeletons got there first and attempted to hold it down.  Not sure what the dog's intentions are. 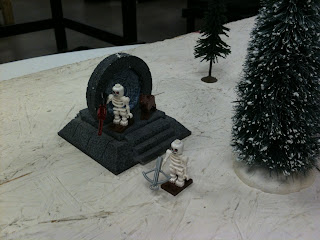 My gunners were able to get a solid position to aim at the rest of the skeleton forces... 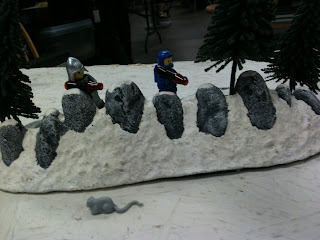 ...even if the Blacktron trooper was able to storm the hill and start taking them down. 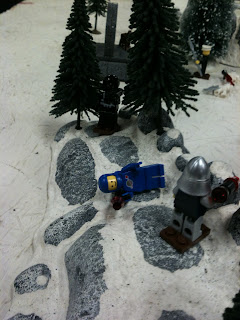 Luckily, I was able to shift an archer to the opposite side of the battlefield, in a position that was more difficult to compromise. 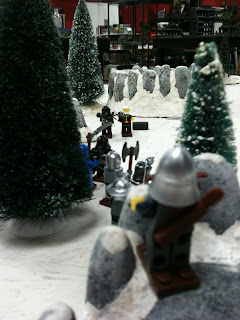 As my infantry helped clean up, the sole survivor of the skeleton crew (the usual policeman-with-spear-and-shield) managed to escape through the gate. 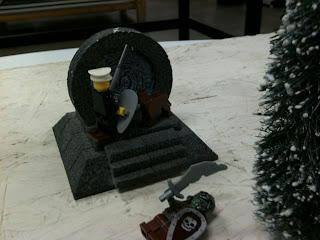 And, while losing their trollish/orcish leader, the knights and their spaceman ally celebrated in front of the stargate with their new canine mascot.  Luckily, their celebration placed them in a nice position for a team portrait. 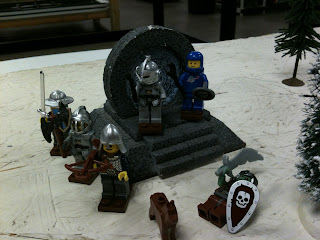 Posted by Jonathan Linneman at February 15, 2016 No comments:

Email ThisBlogThis!Share to TwitterShare to FacebookShare to Pinterest
Labels: In a World Where Bricks Rule, Lego

I'm sure this has been done before, but I wanted to throw together a few monstrous valentines to give to that special someone on Sunday.  Hand 'em out to whomever you choo-choo-choose! 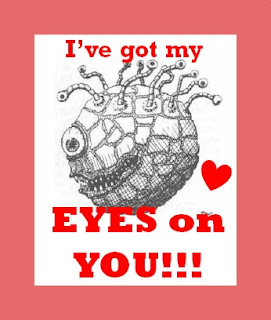 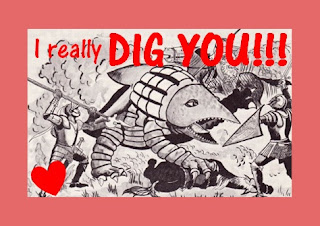 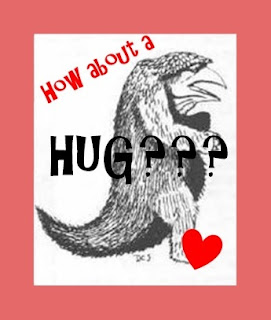 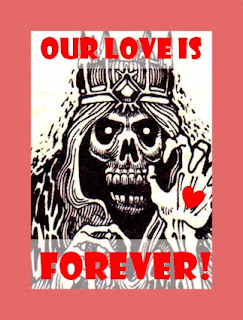 Email ThisBlogThis!Share to TwitterShare to FacebookShare to Pinterest
Labels: valentines

Are you ready for some...

Well, it's a big week here in the U.S. of A., in which we all gear up for the national holiday that is Super Bowl Sunday.  Naturally, that means I'm thinking a lot about American football gaming.

It was a homemade baseball simulation that first led me to purchase "funny dice" (d10s, in this case) as a kid.  I have a soft spot for tabletop sports games and have often thought about how sports might be approached within the framework of old school D&D type games.  So here's where I'm headed at the moment...

It makes sense to build such a game based on players' skills.  Interestingly, this is one of the most open-ended ideas in the realm of OSR games, so there are a lot of options.  Some folks like the idea of modeling skills after saving throws.  Some use a d20 roll-under method like that in the popular Rules Cyclopedia.  Many, however, are willing to stick with the tried-and-true d6 for resolving questions of skill.

The d6 approach does have some history on its side, as some aspects of original D&D were apparently resolved with "x in 6" chances of success.  The use of the six-sider has been further codified in games such as Weird West and White Lies, which use roll-high systems with target numbers, as well as Lamentations of the Flame Princess, which stays somewhat true to OD&D with a unified roll-under skill mechanic.  (I really enjoy the look of skills on the LotFP character sheet, too, where pips are filled in on individual dice.)

While I may not use it all the time, I like the idea of the d6 for its history and simplicity.  Rolls can be modified with White Box-type ability score bonuses without breaking things.  And it would be easy to imagine classes like LotFP's Specialist that are able to gain ranks in whatever skills you could imagine.  Like, say, the skills used in a game of American football.  So that we can come up with something like this: 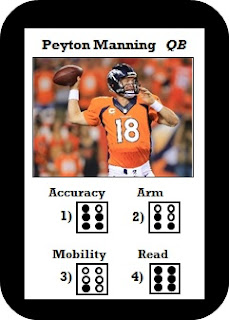 Now, how do we use these numbers?  An easy way would be to generate player-vs-player matchups and resolve them with a couple of rolls.  Stealing a page from the football card game Third and Long, we can reduce an offensive drive to a few "key plays" and identify the players critical to each (getting as specific as the exact skill(s) required by each player).

By random roll (the reason I numbered the skills on Manning's card above) or playing/drawing a card, we can establish which skills to roll for...so there's a showdown between, say, Manning's Accuracy and Luke Kuechly's ability to Read an offensive formation: 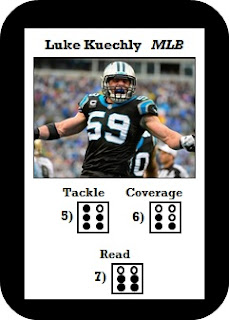 Then, resolve it with either an opposed roll (Manning's d6+5 vs. Kuechly's d6+4, with ties going to the defense?) or an attempt by both players to roll under for success.  I can imagine a somewhat abstract board that teams move along as an indication of general field position:

Or something like that.  (Or, just use opposed rolls...)  Then, add in field goals and punts and whatnot.

This is all pretty much thinking out loud at the moment.  I'm having fun with it and am really open to any suggestions others might have for such a minigame!

And for the sake of my wife...the biggest Cam Newton fan I know...I'll make sure to include this in the post: 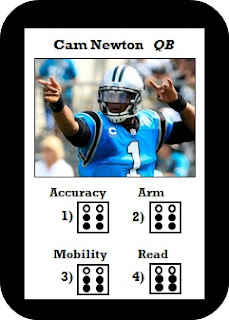 Enjoy the game on Sunday, football fans!
Posted by Jonathan Linneman at February 02, 2016 No comments: