For Dungeonstack's representative of the letter "I," I present what will be one of the most straightforward cards of the month, the Interior Walkway: 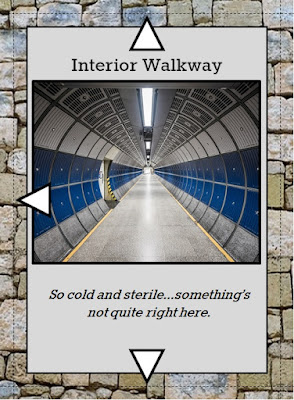 It is...a room.  Where stuff is found.  There are a few things I can note about it, though.

On that artwork...not very fantasy, eh?  Well, I like the generic name of this card, as it could fit artwork and settings of all types...in this case, fairly modern, or even a bit SF.  Also, I've been thinking lately about how He-Man is probably one of the strongest fantasy influences I have floating around in my brain, so I'm happy to include a picture like this alongside the more fantasy-oriented stuff, to maybe give an overall Science Fantasy feel.

I also like this artwork because it nicely translates into the directions that a Hero can exit the room, since it shows a doorway on one side and ends in what could very easily be another doorway.  It was also really easy to flip it around and have a new card: 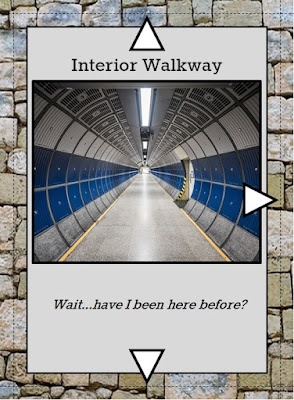 I think that 2 or 3 of both of these in the initial Dungeonstack will be a good direction to go.

Oh!  One final note...because this card is so basic, and doesn't really have any rules text, I wanted to throw some flavor text on there to give it a little extra...um, flavor.  Hopefully this won't end up complicating things.

Thanks for stopping by!  Tomorrow, I'll have my most experimental card yet...although they're all pretty darn experimental at this point...
Posted by Jonathan Linneman at April 11, 2017