Just have to say...Fantastic Voyage has held up... 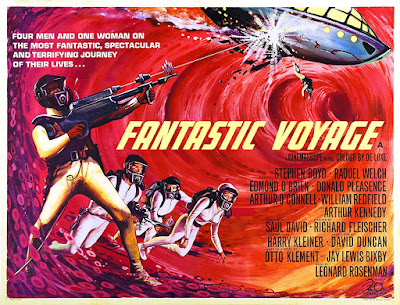 After thinking about the shrunken adventurer genre a bit, I decided to give 1966's Fantastic Voyage another watch last weekend, and I thought it'd be worth noting here that the movie has really held up to the passage of time.  It is, in some ways, a seminal work in this sub-sub-subgenre - to the extent that the TV Tropes wiki simply calls this style of adventure the "Fantastic Voyage" plot - and in my mind, it's quite deserving.

The film is, without a doubt, quite dated.  It really feels like 60s sci-fi...and I love that aspect of it.  The (Oscar-winning!) special effects are trippy and somewhat mesmerizing.  It also took home the statue for Art Direction that year, and I can certainly see why as the movie overall just looks cool.  And that's not just the special effects...the sterile look of the facility where the CMDF (Combined Miniature Deterrent Forces) operates sets a nice tone for the more grounded aspects of the film.

One thing that could probably be a drawback for many viewers is that the process of getting the crew shrunk down and into the human body takes forever.  I'd actually have to watch it again to note the specifics of this, but much of the early movie also runs with no music, so there's a very calm and methodical feel to it that I think extends to this scene.  Personally, I love it, as it emphasizes the danger and fragility of the process, rather than just shrinking, injecting, and moving on to the action.  BUT...I do work in a lab, so I may be drawn to that part of the storyline more than most.

Overall, if you enjoy retro SF, or even just solid SF in general, you should give this film a go at least once!

Now...how about a character?

(I drew a lot of this from the Pilot class from White Star...)

And finally...I suppose Fantastic Voyage is close enough to "military science fiction" to make this a reasonable post to tack on a wish for a happy Memorial Day to my fellow Yanks.  (I hope everyone has a happy day, of course...just calling out Americans since we're enjoying a holiday today...)  I also hope you'll take a moment to reflect on its meaning.  There are a lot of folks who sacrificed everything to help give us this world where I can spend time writing silly stuff on the interwebs.  Our country is in a weird spot, where one side of the political spectrum has attempted to stake a claim to patriotism, to the point that aspects of it have started to seem especially toxic to many who oppose them.  I'd like to think that something like Memorial Day is a great time for us all to find common ground in appreciation for those who truly have helped to maintain our freedom by giving their lives.