A very happy holiday to all!

I'm going to celebrate by pointing out a very nice set of OSR rules for Star Wars gaming that I'm going to guess a lot of folks have overlooked.  Before my group's trip to the Stone Age, my good friend Josh ran a great adventure for us using RPGPundit's space opera ruleset, Star Adventurer. 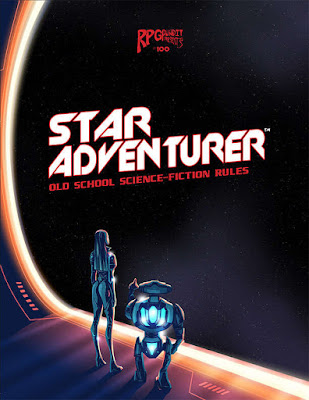 While I'm not familiar enough with the game to give it a thorough review (and not that I typically do those anyway), from what I've seen, it's pretty awesome.  They're very solid rules in the general "modern take on B/X" tradition with enough detail to give a good feel for the genre.  And I guess it's almost obligatory to include some sort of "however you may feel about his politics" clause when discussing the Pundit's work, so...well, however you feel, it's hard to deny that the man knows how to put together a good game.

I went into character creation with the intention of making someone I could represent in miniature form with one of the figures from the classic Galaxy Laser Team...

I ended up with a human that matches pretty nicely with this guy: 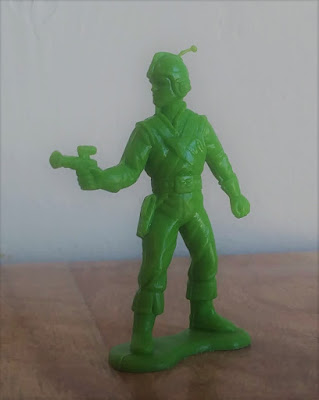 His name is Garm Tharend.  He's a Human Warrior.  And not that you asked, but here's his backtory:

Garm Tharend comes from a multispecies spacer community with no home planet, many of whom have joined the extended family as a way of avoiding the crippling overreach of the Hegemony. This background often brings additional scrutiny from Galactic authorities during Garm’s interactions with citizens who live more traditional lifestyles, referred to by his community as “Worlders.”

This history has led a majority of Garm’s relatives (most of whom are more beholden to their own moral compass than he is) to side heavily with the Resistance, with many of them actively involved in rebel operations. Garm has been slower to back the movement, seeing a possible Resistance victory as little more than moving on to the next tyrant in line. However, he appreciates that the growing conflict has given him additional freedom to live on the outskirts of Galactic civilization.

Being pretty good with a blaster, he’s managed to put together a comfortable lifestyle by taking on a few lucrative hit jobs and living a low-key life in between. After being hired to take out an old droid running illegal schemes in the spacelanes, Garm was actually convinced by Glossig to give up the mission and join his crew instead. (There were probably some psychic mind tricks involved.)

If you actually took the time to read through that (thank you!), it's probably pretty obvious that Star Adventurer can be used easily enough to run adventures in George Lucas's sandbox.  While I've only ever run an actual Star Wars game using the old West End Games D6 rules...and if I were to run one now, I'd probably try out the 5E/LightBox blend I'm so enamored with at the moment...Star Adventurer is a strong game and could be exactly what you're looking for someday to play in a galaxy far, far away.