Now that I've started pondering the goals and structure of my own highly derivative "core" rules for fantasy roleplaying, it's time to start getting the details down.  (Yep, this is just my way of taking notes...)

The first class I'm set on is the Warrior.  I'm keeping this one simple...just using the one I presented for Glaciers & Glyptodons, extended upward a couple of levels.  It's a pretty noncontroversial take, I'd think, and should serve me well across genres and time periods.

You are skilled in combat and tough enough to withstand the hardships of battle.

You can use any weapons or shields and wear any sort of clothing or armor.

If you drop a foe with a melee attack, you may immediately make another melee attack.  (EDIT: I'm gonna have to make this scale with the Warrior's level, I think...)

And just like that, I have a working document!

As for an example Warrior...those are probably pretty obvious, but I think I'll simply stat out a miniature I'm hoping to work into some tabletop playtime (not even a fantasy-based one)... 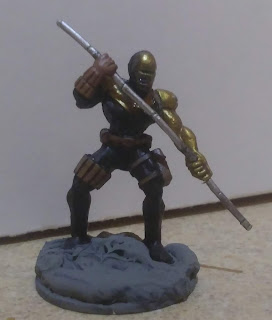 Attack:  Checkmate lance (telescoping) +3, 1d6+1 damage; bodysuit strike +3, 1d6 damage
If Shaw drops a foe with a melee attack, he may immediately make another melee attack.
EDIT:  I realized there may be some WTF reactions to the "bodysuit strike" attack...it's from this scene (from Checkmate #1) really registering with me as a kid for whatever reason...

(I thought the knights of the DC Comics intelligence agency Checkmate looked pretty freakin awesome from the first time I saw them in comic book ads, which must have been back in 1987.  While I didn't keep up with the comic very well, I do remember picking up a couple of issues and definitely enjoyed seeing their introduction in Action Comics, which I did follow at the time.  The look of the Checkmate knight definitely invokes a certain nostalgia for me, which means I was also happy to see that the "retro" appearance made its way to HeroClix years later - Dewey up there is actually a Checkmate Medic figure.  Oh!  And his name came from the great generators over at Masterpiece Generator...I think that's what it's called, anyway...)

And I guess because the universe loves a little chuckle, here's a song that just came on my YouTube mix while I'm writing this post...

Next up:  I figure out which, if any, classes to include beyond the "big four"...and maybe go ahead and steal 'em/write 'em up...