On LARPing my way through life and very tiny adventures

I am 43 years old, and I still play make believe.

If you're reading this blog (which I kind of assume you are), there's a good chance you do too.

I wonder sometimes how common it is for others who enjoy the RPG hobby to apply that love for entering fantastic worlds to daily life.  Maybe I just never quite grew up...?  (Whatever that really means...)

See, I'm not really one to get bored easily.  I can escape into my own head in just about any situation.  Sometimes, though, the task at hand doesn't really allow for drifting off into wholly unrelated thought.  So while I may not get bored, I do sometimes find myself (as I assume most of us do) in the position of needing to focus on things that - due to tedium, or repetition, or just plain old sleepiness - I simply don't "feel like" doing at the time.  And when I do, I like to pretend.

I can remember, as a kid, imagining that I was a member of the G.I. Joe team, mowing the lawn at our headquarters.  Because having to cut the grass is kinda lame.  Getting the opportunity to be a Real American Hero and doing the stuff that has to be done for that team to operate?  Well, that's just fun.

Considering the sort of fictional worlds I enjoy, I have a job now that lends itself to entering a more exciting reality fairly easily.  I work in a lab and get to spend a lot of time doing really interesting science(!) stuff.  When that stuff involves lengthy, repetitive tasks, though - which actually comes up pretty often - I definitely enjoy some impromptu LARPing.  I've worked with Hank McCoy, investigating a mutant "cure."  I've examined the physiology of creatures originating from another realm.  The most fun adventures I've had, though, have probably been as a researcher for the Combined Miniature Defense Force, helping the team prepare for future missions into the wild landscape of human anatomy.

I enjoy this so much, in fact, that lately I've been thinking it's a game setting I should explore more.  (After all, what I really need right now is another setting/adventure seed to distract me from ever accomplishing anything worthwhile in my nerdy pursuits.)  It's actually something I mentioned way back when I was very new to blogging...the idea of adventuring in the tradition of stuff like Fantastic Voyage and Innerspace... 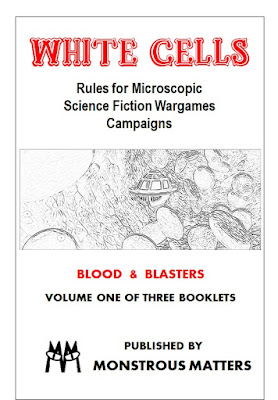 I've never really followed up on it, and I think that's at least partially because I never let my imagination really go on the possibilities of a campaign for very tiny adventurers.  It's easy to think about such a game just becoming a slog through battles with "characters" that don't actually have much character...lymphocytes and antibodies and whatnot.  While there's certainly a place in RPG adventures for faceless foes like gelatinous cubes, I don't think many players want that to be the only sort of menace they face.

In the case of Fantastic Voyage, though, they did manage to make 17 animated episodes' worth of challenges by expanding the scope to include all sorts of missions that can only be accomplished by shrinking.  Maybe that would be the example to follow...?

At any rate, my interest in tabletop Fantastic Voyaging has hit a new high in the past couple of days.  A video made by my coworker Megan just went a bit viral on LinkedIn.  It shows T-cells destroying a tiny tumor and is pretty damn cool.  I could (and do) watch it over and over.

While this is a time lapse video, its sense of action just draws me into the world of the battles that go on within each of us.

Is it the sort of action that's worth springing on a gaming group?  Hmm.  I'm starting to think it is...