I think "delighted" is a fair description of how I felt when I realized a few weeks ago that the trees around the office park where I work are a hotbed for a phenomenon that's gotten a bit of talk in the news (presumably in areas distant from such hotbeds as well...?) - the emergence of Brood X, the periodical cicadas that are making an appearance above ground for the first time in 17 years.  Their presence is already waning and probably won't last all that much longer; then, they'll disappear until 2038...so I feel pretty lucky to have a chance to take in this fairly rare occurrence.  (Quick note: I'm pretty sure "Brood Ten" is actually the proper way to refer to these insects, but I don't hold it against anyone - myself included - for using the letter "X" when referring to them, since it makes them sound even more awesome.  Honestly, Marvel might have missed an opportunity by not running a "Brood X" miniseries right now...!)
These bugs are pretty loud, fun to watch in somewhat clumsy flight, and pretty striking visually.  Here's one I met that first day I saw them: 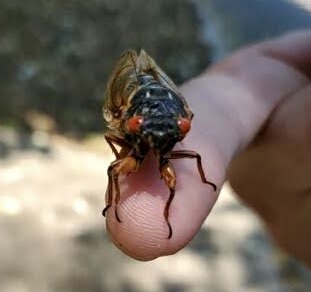 As a kid in south Georgia, the song of annual cicadas was part of my regular summer soundtrack.  Like lots of youngsters, I enjoyed finding (and often attaching to my clothing) the exoskeletons left over from their molts into adulthood.  I think I would have had a field day if I could have been around one of these periodical appearances. 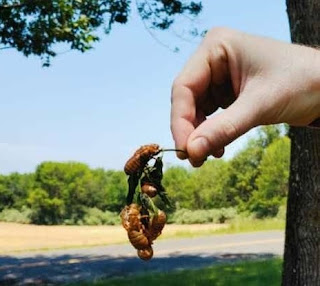 I realize there's a fairly small chunk of the world that's getting to see this right now, but if you're in that chunk, I hope you're enjoying the chance to see a very interesting rarity.  Next up, from what I can tell, will be two groups (Broods XIII and XIX) coming back around in 2024.  Interestingly, Brood XIII (the Northern Illinois brood, which will be making an appearance in the American midwest) also sounds to me like the focus of a work of pop speculative fiction, with the awesome appellation "Brood Thirteen"...and since Brood XIX is the Great Southern Brood, I should be able to time a visit to my family back down south to see their emergence.
Finally, they of course made me want to create a species for a fantasy RPG...

Cicadafolk, also known as Undergroundlings, are an insectoid species known for their remarkable life cycle, unseen in any of the other sapient races of the world. They spend the majority of their lives as part of a subterranean community but emerge in a regular cycle to rear their young, then pass away just as the next generation is ready to return underground.

For millennia, Cicadafolk have come to the surface every 37 years. Most quickly find a mate and produce offspring, then spend the next six years preparing the children to carry on the legacy of their people. This subsequent generation will soon take their turn underground, making their “coming of age” descent just as their parents reach the end of their lifespan. For the next 25 years, the Cicadafolk community will be largely unseen by surface dwellers; and then, like clockwork, the now-31-year-old brood will emerge to continue the cycle on the surface.

While unorthodox, this lifestyle has not prevented Cicadafolk from developing a vibrant culture. Their unique language is conveyed by stridulation and is often thought by outsiders to be music rather than mere communication. Indeed, it’s difficult to tell where the line is drawn between the two for Cicadafolk, and this approach has made many of them highly admired as musicians. The Cicadafolk language does have a written form, but it isn’t used often, as youngsters heading underground do not take written works with them, and there is rarely a system in place for the recovery of the previous generation’s artifacts upon reemergence from their subterranean phase.

Cicadafolk are also known to be formidable in battle. While they aren’t known for being especially adept with weapons and aren’t especially good flyers, their movements often come across as clumsy to those of other species, which makes fighting them an awkward and unpredictable task.

Regions can vary widely in how they feel about the cyclical reappearance of the Cicadafolk. To some, they are a nuisance to be endured until they make their way back underground. Others welcome the unique cultural contributions they bring with them and celebrate their arrival. History also shows a number of instances in which more conniving humanoid species seek to quickly ally themselves with a newly emerged brood in order to win their assistance in a quick takeover of neighboring kingdoms. If left to their own devices, however, Cicadafolk typically avoid physical altercations altogether.

Cicadafolk’s insectoid mouthparts and frequent inclusion of stridulation in their communication make their names nearly impossible to pronounce correctly for most other species, but close approximations are possible. Their names often include syllables that are repeated twice or more. Some common names are Egkegkegkegkin, Artodtodtod, and Gisuasuasuatodt. Or something like that.

Your cicadafolk character has unique traits based upon its origins and adaptations to its unique lifestyle.

Ability Score Increase: Your Wisdom score increases by 2. Choose one additional ability score to increase by 1.

Age: Cicadafolk who are operating above ground are inevitably 01-6 or (more likely) 31-37 years old.

Alignment: The cicadafolks’ understanding of and commitment to their regimented life cycle leads to a tendency toward a lawful alignment.

Size: Adult cicadafolk are usually 5-6 feet tall but can be a bit shorter or taller. They have slender insectoid builds and usually weigh a bit less than other species of similar height.

Speed: Your base walking speed is 25 feet.

Flight: As an adult cicadafolk, you have a flying speed of 40 feet. You can’t travel at this full velocity while wearing heavy armor. You are a somewhat clumsy flier and have disadvantage on checks made to avoid obstacles. In addition, you must succeed at a medium Dexterity check when landing, or you’ll tumble, taking 1d3 damage.

Exoskeleton: Your hard outer shell provides +2 natural armor. This bonus does not stack with any armor worn.

Unsettling Song: Cicadafolk stridulation can be quite beautiful and musical, but can also be unleashed as part of a distracting cacophony. Once per combat, you can use an action to distract opponents with your noise. Opposing combatants each lose one action during their next turn.

Languages: You can speak, read, and write Common and Cicadan, although your ability to speak languages other than Cicadan is somewhat limited by your vocal range. Similarly, other species are only able to produce an approximation of Cicadan. This is usually enough to convey basic ideas, but more complex messages are often lost in such communication.