I finally saw Star Trek Beyond yesterday.  (I thought it was pretty good; my initial feeling is that it's better than Into Darkness but not as good as the first reboot film.  Opinions subject to change.)

So, Trek is stuck in my mind today, and that got me thinking about a book from my squandered youth... 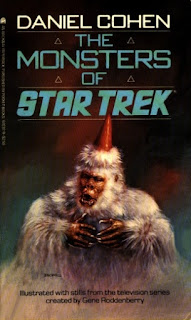 In the 7th grade, I won a trivia contest at my school.  Actually, for some reason they randomly asked one trivia question over the intercom, and then awarded a prize to the first student who could make it to the library with the answer.  I think it must have been some sort of national reading day/week or something.  I remember that the question involved Poe's "The Tell-Tale Heart."

At any rate, after racing my friend Griff to the library, I was allowed to pick out a prize from a rack of books.  (Griff also got one; the librarian decided that it was only fair to call it a tie.)  I chose The Monsters of Star Trek.

Now, as far as I know, this isn't anything close to a classic of Trek literature.  For a while, however, it was my definitive encyclopedia for the creatures of Star Trek (and I do love how the title uses the word "monsters" rather than "aliens").  While I think the first version had a Gorn on it, I had the second edition picured above, and that guy on the cover, the Mugato, became the quintessential Trek beast to me.

If you're a fan of old toys, you might know the Mugato as the monster that for some unknown reason was put into a funny alien uniform when he was made into an action figure (image from the Mego Museum)... 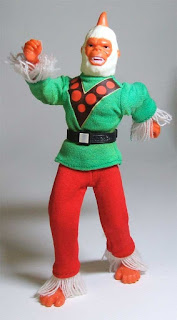 For today's Monster Monday, I figured I'd whip up some quick stats for the Mugato (for general d20-based gaming...see the GRIND for more info):

A victim of a Mugato bite must make a successful saving throw vs. poison/Constitution or become poisoned.  Until they receive appropriate medical care, they will endure 1D damage per hour that passes after the bite.

Here are the Mugato's entries at Memory Alpha and Memory Beta.

And finally, here are some great Mugato renderings from DeviantArt that really caught my eye...

my toon version of mugato from star trek the original series. mugato

originally posted on my sketchblog: http://bootlegsketch.blogspot.com/2008/04/domo-arigato-mr-mugato.html The Mugato from the original Star Trek series--the version on the left is based on the crea...

This one spent a while in WIP status, hehe. Wanted to perfect it. Wanna give a shoutout to the peeps at Scifi-meshes.com, who helped me tremendously with all of their comments and suggestions! And ...