With that thing known as "real life" looming larger than usual these days, I'm somewhat consciously allowing myself to only obsess about one gamer "project" at a time.  Luckily, I've been able to stick to that pretty well as I daydream about what I'm just referring to as an "OSR kaiju game"...that is, a game involving giant monster combat that's at least vaguely inspired by old school D&D-based RPGs.  And since that fits this blog pretty nicely, I might as well brainstorm here... 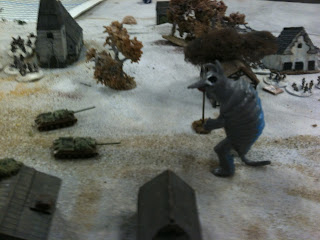 While pretty much any miniatures-based game can be shifted up or down in scale, I'd like to keep something specific in mind as I imagine and fiddle with minis-oriented aspects of these OSR kaiju rules.  (Isn't playing with toys half the reason to play a kaiju game, anyway?)  I played in a 6mm battle earlier this year and think it's time I gave the scale a much better look.  It's convenient for quickly visualizing the size of an element on the table, since it has an easy 1 foot = 1 mm conversion factor.  There's a fair amount of 6mm miniature stuff out there already.  And, most importantly, it seems like it'll hit a "sweet spot" where monsters really can be the most imposing forces on the battlefield without having to reduce everything else to unrecognizable bits and pieces.  A common tank should be about an inch long at this scale; that seems about right to me. 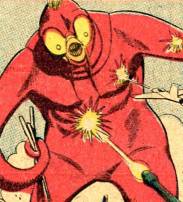 As far as managing battles among forces of different sizes, I think I'll go with something like the size categories I proposed a little while back.  Basically, the stats assigned to any being are presented as if it's a human-sized D&D character.  So, for example, a 150-foot giant monster with a Strength of 10 only has average strength if you're comparing it to other 150-foot monsters.  Damage, to-hit probabilities, and attribute tests can be further adjusted according to where an individual falls on the size scale.  In the previous entry, I threw this together:

I think I'll keep working within this framework.  I do want to extend the scale a bit in both directions (so garden gnomes can get in on the action, and to allow for even gianter giant monsters), and my working method eases up on the mechanical jump from one size category to another.  Right now, I'm trying to let each step on the size ladder represent a +/-1 to hit and a +/-1d8 damage.