So here's something new for this blog: original fiction!  Why?

I've been thinking lately about figuring out a way to elaborate on the characters of Dogwood City (my supers setting based on public domain characters).  At the same time, I've become a fan of the drabble (a micro-story), and specifically those that stick to a specific word count.  So, why not combine the two?

Gotta say...the superhero drabble thing is pretty fun to write!  I'm thinking it might be the next big thing in speculative fiction.

Well...it should be.  If anyone else wants to write a 100-word superhero story, I'd love to read it!

Here's my first crack at it: 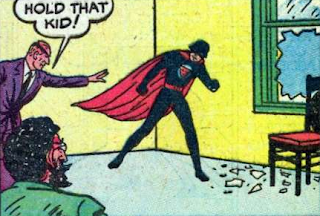 Cub looked down at his gloves.  He could see a glimmer of blood shining under the pale streetlight.  It had only taken him two punches to bring the hood down and render him nearly unconscious.

Black Lion would be proud.  He’d barely approved this first solo patrol for the young sidekick, but results like this should help.  Now, what was it that Black Lion always said about fighting criminals?

The first punch is survival.  The second is justice.  The third is vengeance.  You have to figure out where you’re going to draw your line.

Cub gritted his teeth and swung.
Posted by Jonathan Linneman at August 10, 2016