All right...how 'bout we take a few moments this #MonsterMonday to check out another Kaiju of the Silver Age?  This evening's entry encountered my favorite Silver Age hero (or...close, at least) in 1960's Showcase #24.  This would be Hal Jordan's final Showcase appearance before gaining his own title a few months later.  It's also the first time he shared a cover with a giant monster.  Which I think is pretty cool.  (It's something I've never done.)

Here is The Creature That Couldn't Die (hereafter TCTCD):


Unfortunately, I only own this story in black and white (in the GL Showcase trade), and I don't have access to a scanner at the moment (just an outdated digital camera), so there are probably going to be a couple of janky pics following.  I did find one nice color image on the web that gives a little idea of TCTCD's scale and general kaiju-ness...


TCTCD started life as a blob in a test tube.  We don't really know anything more about what it's made of, as the scientist responsible for its creation literally says (as he sees it growing in the tube):  "Great stars!  What's happening to the blob I placed in the test tube?"  A natural reaction, I suppose...although understandable when your research is on...wait for it...cosmic rays! 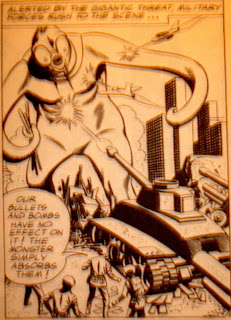 As luck would have it, the scientists who witnessed the genesis of the monster happen upon GL, who heads off to halt the destruction.  There's a twofold challenge for Hal, though:  First, because every Silver Age GL story apparently required Hal to work around his ring's weakness, TCTCD fires yellow beams from its eyes.  More importantly, though, being powered by a constant bombardment of cosmic rays makes the beast too powerful for even a Green Lantern ring to defeat.

Except that...well, Hal has an idea.  Maybe if he can block off the monster's power source, he can weaken it.  For extra irony, why not block the cosmic rays with a GIANT test tube construct...?  The results are remarkable: 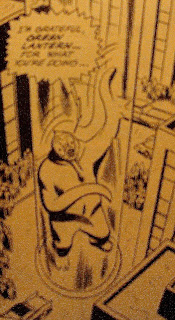 TCTCD shrinks to become a lifeless blob, revealing as he does that his path of destruction was only a result of his own clumsiness.  His final words:

It's also a bit unfortunate that, even with that result, GL's encounter with the creature is sort of anticlimactic.  Around half the story is devoted to Hal's interactions with Carol Ferris...all that she-only-loves-Green-Lantern-and-how-ironic-that-I'm-him-but-I-can't-tell-her stuff.  Sometimes, though, I guess that's half the charm of these old stories.

As with last week, I'm not gonna stat this guy(?) up (yet).  I've been doing a lot of daydreaming about an OSR-based kaiju game, so when I start brainstorming for that here on the blog, I'll work in the Silver Age monsters I've covered.  Stats aside, though, I would like to be able to give an idea of how big this thing is...but the scale is pretty tough to figure on this one.  Based on the number of floors in the buildings it's next to when Hal defeats it, you could argue that TCTCD should only be about 70 feet tall.  In some shots, though, it looks like it's towering over skyscrapers in the Coast City skyline.  Maybe it's variable due to the effects of the rays...?

For simplicity, when I stat it up, TCTCD will probably stand around 100 feet.  That seems like a nice basic size for metropolitan kaiju.

Hopefully, I'll get my #MonsterMonday post up a little earlier next week...and hopefully with another giant creature from the Silver Sixties...!