I'm also a pretty big fan of the Silver Age of comics.  The era that gave us the Green Lantern Corps, the Fantastic Four, the Challengers of the Unknown, Adam Strange, Animal Man, Thanagarian police officers protecting the Earth, and so on (for days...) is always worth celebrating.

I'm a lucky man, because the two are pretty much inseparable!  There's probably a lot that could be written about this connection (by folks a lot more knowledgeable than I).  It's interesting that superhero comics as we know them today and Japanese tokusatsu were forged in the same post-atomic era, were informed by the same drive-in movie aesthetic, and followed many of the same themes.  While the giant monsters of Silver Age comics rarely reached Godzilla's stature (physically or culturally), American superheroes tangled with daikaiju in one form or another quite a bit.  (Check out this post by Hugh Fox III, where he gives a really cool overview of DC heroes' encounters with giant monsters in the Silver Age...and a great starting point for checking out Marvel's contributions!)

Here on Monstrous Matters...and especially on days like today when we celebrate a fine #MonsterMonday...I was thinking it'd be fun to take a look at some of the iconic, near-iconic, or should-be-iconic giant monsters from Silver Age comics.  I'll start things off with one of the most important of the era, because we see it on the cover of one of the most important books of the era: 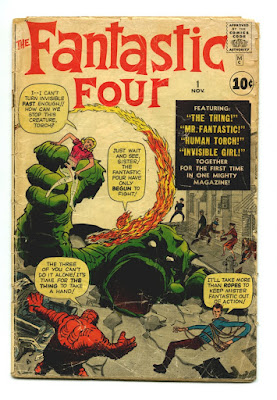 By the time Marvel Comics entered the heroic era with FF#1 in 1961, the company (along with its very recent predecessor Atlas Comics) was already known for the monsters it was putting out.  And when you have Jack Kirby on board to draw these awesome creatures...well, why not?  I think there's something very fitting about the cover to Marvel's first Silver Age superhero comic featuring a hero in the Human Torch that followed the DC Comics recycle-a-Golden-Age-super method, a giant monster as the antagonist, and a hero that helped define the Marvel approach to supers by being a "monster" himself (the Thing, of course).

That guy the FF is fighting...that's Giganto, a resident of Monster Isle and servant to the Mole Man.  Here's how we're introduced to it in the story... 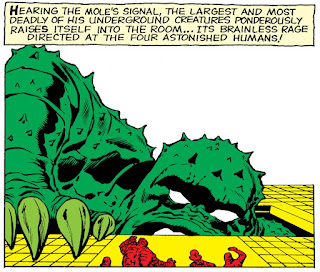 To be honest, we don't learn much about Giganto at the time.  We have an idea that it's subterranean in nature...and we know it's big and strong...but the issue's action actually ends pretty soon after his appearance, as (spoiler alert) the team escapes the Mole Man's underground lair, and Johnny creates a rock slide that seals off the beasts that have been enslaved by the villain.

Giganto would make more appearances in the Marvel Universe.  When possible, his role in that iconic Silver Age cover is referenced.  Like here... 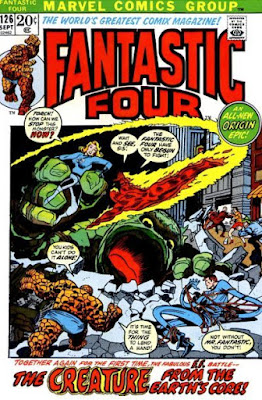 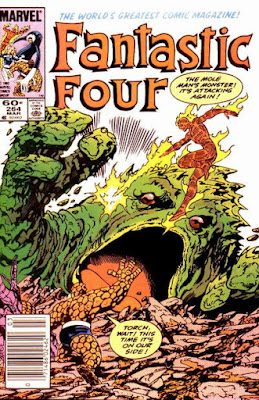 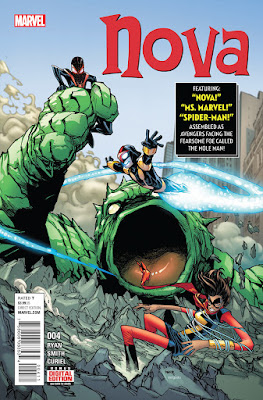 ...and here, the book where we're finally able to learn Giganto's name... 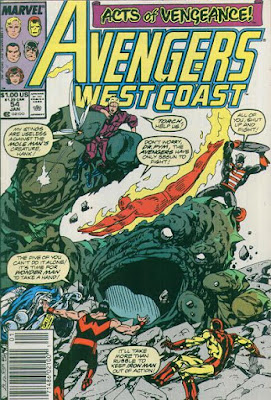 I normally like to stat up these creatures when I post about them on a #MonsterMonday, but I don't know that it's worth it in this case.  Giganto would basically be a big (60', apparently) beastie with enough hit dice to be a threat and the ability to dig and hold its breath underwater pretty well.  At the moment (which is getting pretty late on Monday), I'd rather just appreciate the huge (no pun intended) role Giganto has had in the history of comics, and give it a big hand (pun intended) for that.
Posted by Jonathan Linneman at August 22, 2016