Or, The Continuing Adventures of Sir Mulligan

Here is (finally) the result of my initial playtest of card-based dungeoneering for The Black Hack.  The first post can be found here, but to quickly summarize:

(1)  I took a stack of CCG cards - mostly locations from Tomb Raider and monsters from Magic: The Gathering - and shuffled them together to form a "dungeon."

(2)  I made a simple, level 3 character (Sir Mulligan) to send into the dungeon (attempting to obtain the Vitality Salve). 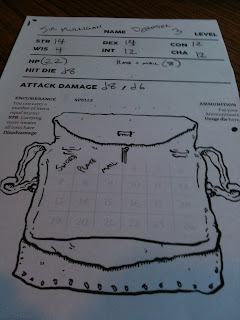 Here's how it went (with apologies for my low-quality pics!)...

Sir Mulligan entered the first room (an Open Cavern) to find no enemies waiting for him.  He did, however, find a mystical grub (that would be a Butod from the Survivor CCG) and ate it to gain +1 to STR for the day.  Good start. 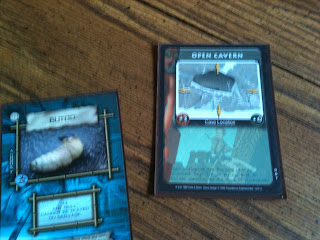 Mulligan could continue in any of three directions.  He headed north only to hit a Dead End. 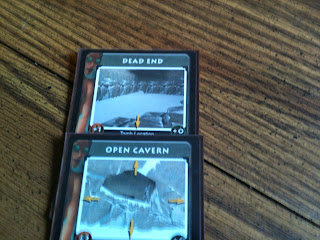 Luckily, the room was empty, so there were no hindrances to heading back into the Open Cavern and moving east. 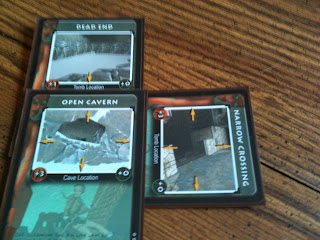 The Narrow Crossing found there was a bit more dangerous.  Drawn before the room card... Four minotaurs would be tough to face.  However, there was a random event before combat - some destruction at the hands of the storm god Keranos... 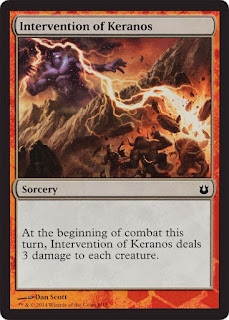 This Intervention dealt 3d8 damage to Mulligan; a pretty good roll led to losing just 8 total, which wiped out his armor for the time being.  It also killed three of the minotaurs, leaving just a single (weakened) Mogis's Chosen to fend off: 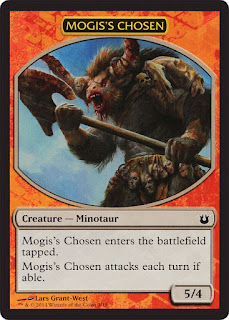 Now, most of the minotaurs in the dungeon have haste, which I decided would give Mulligan disadvantage on initiative rolls.  Not the case with Mogis's Chosen, however!  Mulligan was able to take care of him with a single action and continue moving east.

(At this point, it occurred to me that I should use a token of some sort to mark Mulligan's current location.) 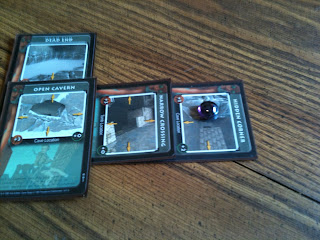 Mulligan entered a Hidden Corner, only to find... 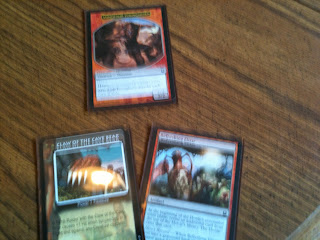 That's pretty blurry, I know...it's two items, the Claw of the Cave Bear (boosts damage) and a Refreshing Elixir (restores health), guarded by the standard minotaur grunt, a Younghorn: 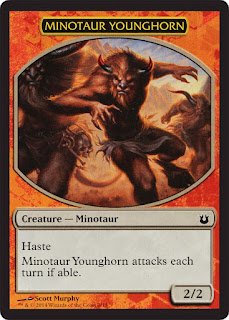 The Elixir indicates that another card is to be drawn before we take actions.  If it's another room, I'll shuffle it back in.  It could be another item or enemy, though... 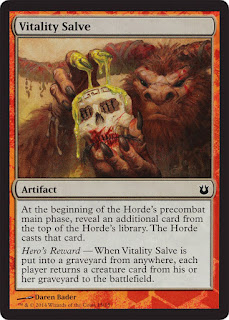 ...and it turns out to be the Vitality Salve!  This was the goal of Mulligan's quest, so he faced off with the Younghorn, and...

...actually defeated him pretty easily.  Mulligan didn't even take any more damage, in fact, and so he gathered up his loot... 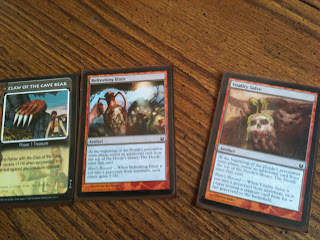 ...and headed back to the entrance. 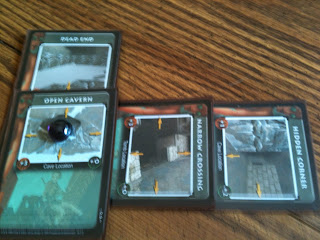 Mulligan brought the Salve to his fallen comrade, as instructed.  He still has an Elixir and Claw of the Cave Bear to aid him on his next adventure.

This first test was actually pretty fun(!) but ended up being way too easy.  I know that the nature of this exercise is going to keep the difficulty variance rather high, though, so it'll take some experimentation to see how common this outcome is.

Also, it didn't occur to me until after the event that maybe a saving throw should be possible for events like the Intervention of Keranos.  Whether that should be for PCs only...or for all creatures...I'll have to think about (and welcome any outside thoughts!).

Sir Mulligan should be adventuring again soon...
Posted by Jonathan Linneman at July 26, 2016