Continuing with my brainstorming on The Black Hack...

I'm a BIG fan of card games.  They're what brought me into the hardcore gaming hobby, and there's still very little in the world of gaming that I enjoy as much as getting in a few rounds of Magic or playing a game of Bohnanza with the family.  I've long looked for a good way to blend my love of OSR roleplaying with my love for slinging cardboard.  The simplicity of characters in TBH (especially the lack of a need for stat modifiers) has triggered a hope that the key lies therein.

I know the Pathfinder Adventure Card Game is pretty popular these days, and I'll look at its setup for some inspiration, but a bigger influence comes from a less likely source: 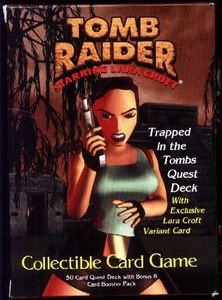 Believe it or not, the old Tomb Raider CCG is a really good game!  It can be played solitaire (here's a pic of a completed solo game)... 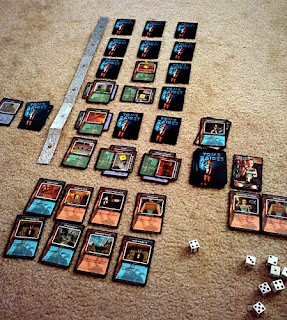 ...and includes exactly the sort of cards you'd expect from a tomb delve dungeon crawl based card game: 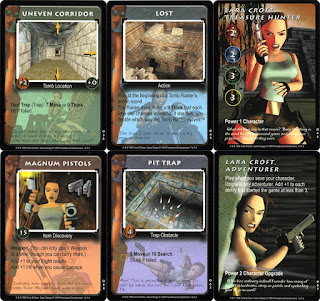 (These Tomb Raider pics were all snagged from BoardGameGeek, by the way!)

Basically, you have adventurers, the places they go, the stuff they use, the stuff they face, and the things that happen along the way.  All of this seems like it could fit nicely into a TBH shell!

Now, it may be evident from my Underground Elemental Beastfighting posts that I also enjoy laying out playing cards.  It's fun.  It's relaxing.  And it seems like a great way to build this thing I'm working on from the ground up.  Here's what a PC might look like: 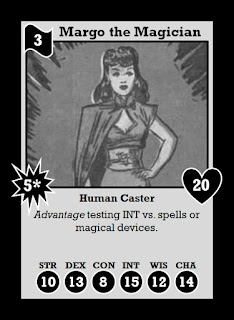 Level and name at the top, damage and HP at the bottom corners of the picture, abilities and stats below.  Equipment and spells prepared can easily be handled by separate cards.

I'm also using some alternatives to the original three D&D (and their related TBH) classes.  So far, I'm going with Defender, Caster, and Healer...all of which are conveniently designed such that if you take the average of their damage and HP values, you get nice multiples of five...which will be really convenient when it comes to damage counters.

There's a lot that's still up in the air about how dungeons will unfold, so I'm experimenting a bit.  I think I could enjoy the rather roguelike experience of letting the setting be revealed room by room with cards like this: 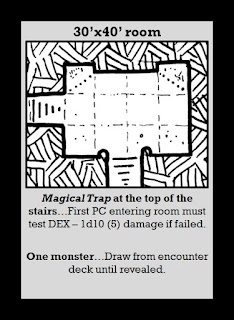 ...BUT I'm still iffy on a lot of questions that naturally emerge...like how many separate decks need to be involved.  It'd be outstanding if a dungeon could be found in a single deck, so I may need to play around with letting each card have a room, a monster, AND an item.

(That dungeon artwork, as I'm sure you already know if you're familiar with his work, is by the incomparable Dyson Logos, specifically a tiny portion of his map for the Orcus Pit.  Check out his stuff...you won't be disappointed!)

I'll post more here at the blog as this idea moves along.  I'm just glad to get the first few steps of TBH idea #1 out of my head and onto the digital page!

Oh yeah, one more thing...I mocked up a cardback, too: 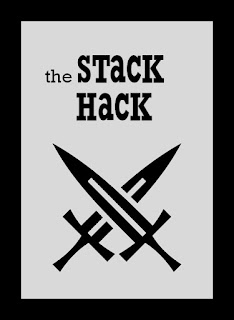 I do like the ring of "the Stack Hack," so that's at least the working title...
Posted by Jonathan Linneman at July 09, 2016

Email ThisBlogThis!Share to TwitterShare to FacebookShare to Pinterest
Labels: microgames, The Black Hack, The Stack Hack