I really wanted to get a quick(?) post in today...something to put a little gaming goodness on my mind, which has lately been occupied by my work, worrying about my work, and worrying about my country (in some order).  I've been able to surf the blogosphere some, but I need to let my mind wander with some good old geeky brainstorming.  So here I go...

David over at The OSR Library has put up a couple of posts on an excellent OSR funnel/adventure called Caveman vs. the Fire Apes.  His work really has me thinking about how fun it could be to run funnel-type adventures as a regular mode of gaming - just pick a genre that seems fun, run a really deadly adventure for a session or so, then move on to another before anyone gets bored.  At the very least, I think it'd be fun to design some of these, as a way to explore OSR gaming in a variety of genres without investing in a full campaign.  So...what would I like start with?  Inspiration struck this morning:

When we take the dogs to our regular hiking trail, we always pass by this place... 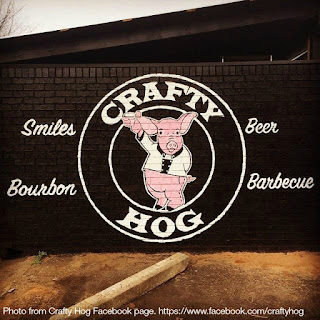 ...and I'm always entertained by it.  Why?  Well, the backstory has to do with all the time I've spent driving around small towns on or near the coast for my work.  My coworker Meril is Indian, and during our trip several years ago to the Florida panhandle, he decided he'd like to experience a good old all-you-can-eat Southern-cookin' buffet.  We found one at this small restaurant (I'm afraid I can't remember the name) that happened to be one of those barbecue places that decorates with all sorts of happy - and often anthropomorphic - pigs.  Now, I remember back in the day, when I lived in Macon, GA, that I was often amused by the logo for Satterfield's Restaurant and Catering:

Pretty danged insensitive when you think about it from the pig's perspective, eh?  It's a smoking pig.  Hrm.  Now, I'll "admit" that I avoid eating pig...but even to those who love to consume the Other White Meat, there's something weird about that, right?   Anyway, for some reason, during that meal with Meril, the whole pig-promoting-BBQ thing finally struck me as one of the most ridiculous phenomena I would get to see regularly while driving around these United States.  Those happy hogs imploring you to eat the flesh of their brethren are everywhere.

Now, I know I'm not the first to be entertained by this.  There's a TV Tropes page for Let's Meet the Meat, and I've actually just discovered (while looking up some stuff for this post) the amazing, but now abandoned, blog Suicide Food, which specializes in pointing out these nihilistic marketing stories.  (Seriously, check out that site sometime...you can find stuff like this fascinating logo for the Smokey & The One Arm Bandit BBQ Team...) 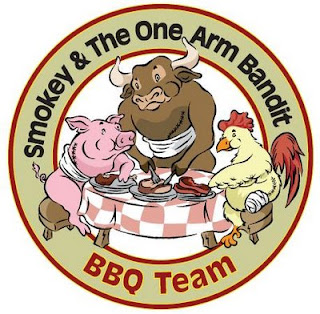 So, where am I going with this?  Well, after that meal, as Meril and I spent hours in the car passing many of these local eateries, we began to spin the legend of Justice Pig, the anthropomorphic hog whose mission in life is to rescue...and avenge...those of his species who have been forced to take on these humiliating roles in promotion of their own slaughter.  I've always imagined him as a Rambo-style commando, something like this: 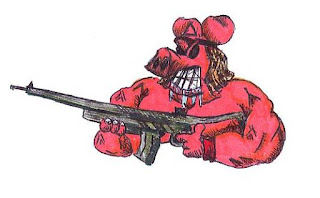 (Be sure to check out artist leshaussebons's DeviantArt page, by the way...that's where I snagged that pic!)


He even had some catchy slogans:

Now that I think about it, Meril and I must have gotten pretty loopy on those trips.

Ah, so, where I'm going with this is that I'm thinking:  Why not make a funnel-type adventure for warriors like Justice Pig?  I can go with something like the Swine League Opposing Persecution (S.L.O.P.), dedicated to securing the freedom of rational pigs everywhere who are being held in marketing servitude.  The deadly nature of a funnel matches up with the life-and-death subject matter, and I even get to make a little bit of a statement about how ridiculous our approach to the use of animals can be, hopefully without coming across like some self-righteous a-hole.

Looking forward to this.
Posted by Jonathan Linneman at November 12, 2016