I was hoping to get this post up today, to get started again on Monstrous Mondays...and then seeing the excellent post by Tim over at The Other Side (on a "monster naturalist" campaign) energized me to make sure I wrote a bit about the 'Mons this week.

Pokémon has seen a bit of a surge in retro fun lately, starting with the focus on first-generation monsters in Pokémon Go.  Then, earlier this month, the newest set for the trading card game (Evolutions) dropped in English, also revisiting a bunch of G1 critters to celebrate the 20th anniversary of the franchise.  And this new set doesn't just feature the older monsters; some of the cards are essentially identical to those from the game's very first set, and some are updated just enough to take into account the game's power creep over the years.

For example, back at the start of the game, one of the most dangerous Pokémon in the game was the quick- and hard-hitting basic beast Hitmonchan.  His original card looked like this: 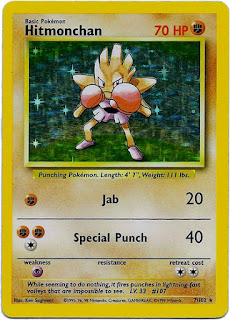 Back in 1999, that was a force to be reckoned with.  Today, those stats aren't nearly as impressive.  So, for the new set, the designers have given us this: 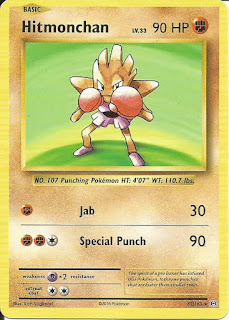 Basically, they took a B/X character and converted it to Pathfinder.

Now, overall, this seems like it would be easy to chalk up to lazy design and an attempt to grab more of players' money while putting out minimal effort.  I'll admit, though...these nods to the game as it used to be make me want to pick it up and play again!  (And that's coming from someone who thinks...as ridiculous as this probably sounds...that there might be a legitimate ethical problem at the heart of the Pokémon franchise.)

So, for today's Monster Monday, I'd like to start getting into the habit again of statting up monsters for the Underground Elemental Beastfighting theme that I've explored a little here on this blog.  It'll be easy this first time around...I'm just going to take a few of the beasts from the new TCG set and convert them to generic old school RPG monsters.  (Quick and dirty conversion rules:  HP/10, 1d6/30 damage, HD = Level/20 rounded up, bonus to hit for 1-energy attacks, penalties for attacks requiring 3+ energy, AC based on retreat cost...and a few little tweaks here and there...)

So let's see...may as well start with some basic elements that form a nice triangle, and go from there... 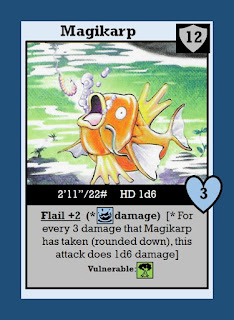 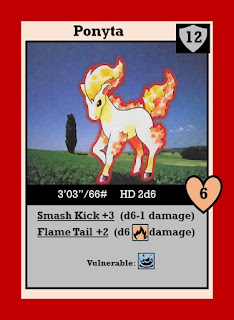 ...which should burn wood pretty easily... 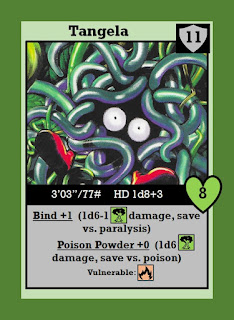 ...and bring us right back 'round to water.

Happy Monstrous Monday, all!
Posted by Jonathan Linneman at November 28, 2016