Reflections on the A to Z Challenge

All right, it's time I step up, like so many others have already done, and reflect a bit on the April A to Z Blogging Challenge that recently came to a close.

My first thought is that I'm extremely glad I did it.  It gave me an excuse to spend some time building a comic book setting...rather than just thinking about building a comic book setting, which is what I was more likely to do otherwise.  I was very happy to get some great thoughts from visitors who may have never stumbled upon my blog if it weren't for the challenge.  And perhaps most importantly, I really enjoyed the process of looking through public domain comic book characters and reading the stories themselves.

It never felt like a chore, although real life certainly made my posts a bit later for a few of the letters (and would have almost certainly ensured a non-post day if the challenge weren't in effect).  I looked forward to putting a post up each day, and that feeling was enhanced by the idea that I was building something, so I think I picked a good theme for myself. 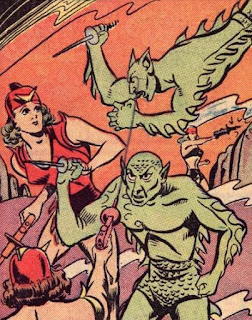 Now, about Dogwood City itself.  I started out thinking the ground I'd cover would mostly be non-powered, costumed heroes, with the occasional non-costumed science fiction adventurer.  Batman and the Challengers of the Unknown.  That's the team-up I wanted to work with.  I didn't want to build something that had so many beings of such power that it no longer resembled the real world.

I mentioned during the month that I was surprised to find myself drawn to some of the more magical/mystical characters (arguably starting with Frankenstein and certainly coming into focus with the Heap).  This is probably influenced in part by the fact that the wife and I are reading the Harry Potter books at the moment, and the idea of a magical world mostly hidden from the view of us Muggles is really appealing.  And that's not pure fantasy...sometimes it's science fantasy, like Mermeans fighting sea demons in the image above, or the other ridiculous/awesome adventures of Typhon.  Even the planet-hopping of the Space Rovers fits the bill.

It looks like the team-up I've ended up with is more like Batman and Harry Potter.  And, for now, I like it!
Posted by Jonathan Linneman at May 04, 2016