In the first edition of Dogwood City Regrets, I lamented the dearth of apes that I managed to put into my month-long journey through a comic book setting.

It's really a shame.

It's even more of a shame considering that I discovered one simian character that was almost too amazing to exclude.  This is the Six-Gun Gorilla: 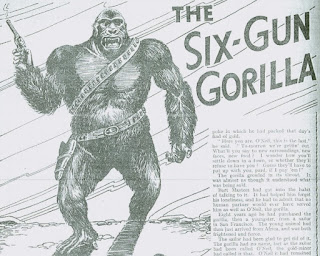 And he's pretty much exactly what you think he is.

Turns out he's looking for revenge on the Strawhan Gang, a bunch of Old West bandits who murdered his owner.  As his name implies, he achieves this using a six-gun.  So simple.  So perfect.

6GG, as he lets me call him, ultimately didn't make the cut for Dogwood City due to the fact that I shied away from Western characters that wouldn't have a huge impact on the present.  He also appeared as a feature in the British story paper The Wizard, while I focused on more traditional comic book characters.  However, he's definitely filed away for the day I decide to explore the Weird Western history of Dogwood City.

I suppose I should have been familiar with this ape, as he apparently had a couple of comic book appearances in 2013, including one from BOOM! Studios.  I somehow missed those, or...if I saw them...didn't get the historical significance at the time.  I'd love to know how they are, if any of you have read them.

By all means, check out Six-Gun Gorilla on the PDSH Wiki and especially at the website of geek extraordinaire Jess Nevins, who very kindly scanned and posted the serial.
Posted by Jonathan Linneman at May 20, 2016