All right!  After enjoying a wonderful Memorial Day among real monsters in the mountains of north Georgia, it looks like I'm going to get another one in under the wire for #MonsterMonday! 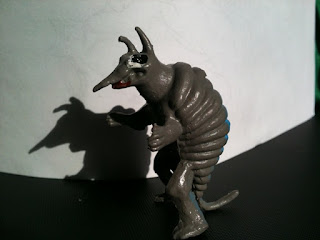 The Ohmadillo is charged with the element of lightning.  Its beak and antennae constantly emit crackles and sparks, especially after a large meal (typically grubs and worms).  Electronic equipment within 30 feet of a live Ohmadillo has a 20% chance of failing.

Ohmadillos frighten easily and are quick to defend themselves.  Their stubby but strong forelegs attack with the power of thunder and lightning.

Unfortunately, Ohmadillos are confused by modern vehicles and are all too easily killed on the highways when they find themselves stranded on our world. 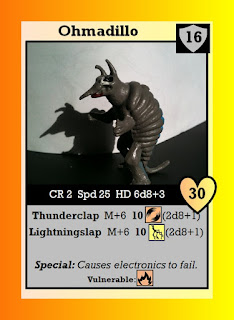 (It may be clear that I'm working my way through the damage types of 5E for the "elements" of the Beasts.  I doubt I'll include all of them, but thunder and lightning seemed like good ones to include next.  Also, I made this one vulnerable to fire based on the increasing resistance of an electrical current with increasing temperature...if I'm right on that...)
Posted by Jonathan Linneman at May 30, 2016