Here's my second entry for #MonsterMonday...another creature pulled from that iconic set of cheap plastic "dinosaurs" and commonly used in Undergroud Elemental Beastfighting.  The rules below are for 5E (pretty much...I think I covered all of the really important stuff).

(See last week for the first Underground Elemental Beast "card," of the Charchaeopteryx.  Oh...and this week's picture is actually of my own figure that I've had since I was a kid!) 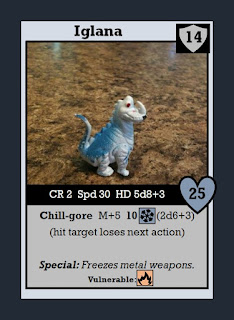 The Iglana is a fierce reptile imbued with cold elemental energies.  It is usually found in frozen environments and seeks shelter for hibernation during warm seasons.  It's not unusual for adventurers to encounter a family of 7-10 Iglanas in accessible underground areas.  Iglanas stir easily while hibernating and are quick to return to full capabilities if they sense a threat.

Any creature hit by an Iglana attack loses all actions (including reactions and bonus actions) and movement for one round.  (They may still perform an action if an ability is used to grant an additional action for the round.)

Iglanas are really cold!  After hitting the Iglana with a metal weapon, the attacker must succeed on a DC 15 Constitution saving throw or drop the weapon.  This effect may be mitigated by gloves or other insulation for the hands.
Posted by Jonathan Linneman at May 23, 2016