Top 5 Alien Invasion Movies That I'd Like to Game 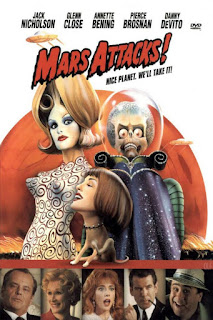 I'm not sure if it's the upcoming Independence Day: Resurgence, or the impending alienation drama of Batman v Superman, but I've got invasion on the brain right now.  I've often wanted to play out an alien invasion scenario in game form - RPG, miniatures, boardgame, or whatever - but have never committed the time (and, in some cases, money) to make it happen.

When I do take the plunge, here are the movies I'll be looking to for inspiration:

I know there are plenty of big robot games out there, and at some point, I should indulge.  This one's just an honorable mention because I don't necessarily want to play it as an alien invasion...I just want Optimus Prime and Megatron to face off on my table.

What I really love about the idea of a Transformers game is that the toys traditionally come with their own tech specs...which are just asking for a gaming treatment.  I know some efforts have already been made to make the specs gameable; someday I'd like to take a shot at a d20/OSR interpretation.

My intro to this franchise came with Tim Burton's excellent 1996 movie, and it needs to be included on a list like this because it defines so much of what makes me want to play out an alien invasion.  I'd put it higher except that I haven't yet put my money (and time) where my mouth is and actually played the miniatures game from Mantic Games, which looks absolutely amazing!

I've certainly played superhero games, but never one focused on a comic book-styled alien invasion.  I'm a sucker for Kryptonian lore, so I'd probably want to go that route (and I'm pretty sure there were some nice Man of Steel HeroClix figures available), but I'd also like to expand it a bit, maybe in the style of DC's late 80s crossover, Invasion! 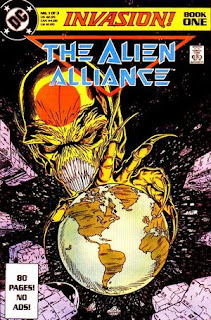 I'm not sure what a game version of Ed Wood's classic would even look like, but it's just too wacky to pass up.  I think the movie is public domain anyway, so a fan-made supplement would be very feasible!  Apparently, this was remade last year, but I haven't seen the new version to comment...

...or whatever you prefer to call the 1998 film.  The X-Files have pretty much defined a genre for a generation of science fiction fans and gamers.  Even on Wizards of the Coast's own website, I think I remember seeing a reference to playing d20 Modern in "an X-Files style campaign."

While there is no official RPG, there are a number of options for gaming in this style, including the similar predecessor Delta Green.  If I get to run a modern conspiracy game at some point, the X-Files alien mythos angle will be difficult to resist.

There seem to be plenty of creepy clown minis out there.  Paint 'em up with a bunch of pretty colors, throw in some normal townsfolk, pick a ruleset that can handle some wacky Killer Klown effects.