So, just over three weeks ago, I found this little guy in our backyard: 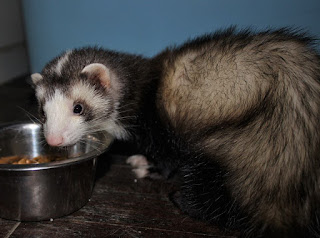 Yep, that's a ferret.  Probably lucky that our two dogs that actually found him weren't able to get all the way to him.

His name is Macaroni.  Previous to yesterday's first vet visit, her name was Macaroni.  A little hint if you're ever in need of sexing a ferret:  Don't just glance at an explanation and then go back to being amazed that you just found a ferret in your backyard.  It's actually pretty easy to tell the difference.  But if you're wrong, and then are corrected three weeks later at the vet's office, you feel pretty stupid.

You know what makes me feel better, though?  Watching this:


How about some RPG content to round this one out?

Macaroni would like to hang out with your adventuring party but would rather not be an animal companion.  (Playing sounds good.  Fighting, not so much.)  If Macaroni is in your party, and one of your adventurers finds that something is missing, there is a 5 in 6 chance that Macaroni has it stashed away in his hidey-hole.  It would be a good idea to figure out where he hides stuff.

Here's the d20 SRD entry for a weasel if you'd like to see the "origin" of Macaroni's stat block...
Posted by Jonathan Linneman at January 08, 2016

Email ThisBlogThis!Share to TwitterShare to FacebookShare to Pinterest
Labels: Macaroni