On the Ages of Superhero Comics

I've been doing a bit of skimming/research for the dream that I might be able to run an RPG campaign at some point in the near future, and I'm thinking of working with some sort of historical setting.  Looking over timelines for the various ages of civilization (both realistic and mythic), I can't help but find my mind wandering to the ages of superhero comics to which they've lent their names.

I've enjoyed superhero comics for most of my life, and I have a lot of thoughts on this subject.  I'll assume that some of the folks who happen upon this blog might be in the same boat...so I'm going to share those thoughts.

First, a review (and we'll let my commentary creep in slowly).  Most observers agree that the first two ages of superhero comics have clear beginning points:

Superman got the ball rolling in 1938.  While superhero tropes were running around in comics and other media before this, Action Comics #1 codified them and laid the groundwork for decades of comic book adventures.  It might be fair to say that if Jerry Siegel and Joe Shuster had named their hero Megaman or Amazingman, we'd be referring to megaheroes or amazingheroes today.

The popularity of superhero adventures dropped after World War II but was reinvigorated in the next decade with...

Superheroes were vaulted back into the spotlight with a reimagining of the Flash.  We ultimately got a revamped Green Lantern, Hawkman, and Atom, as well as an entire new universe of heroes from Marvel Comics.  Marvel and DC would develop somewhat distinct company styles (although probably not as different across the board as many would have you believe), with DC focusing on straightforward superhero adventure, and Marvel incorporating more of a supers-as-real-people approach.  The Comics Code ensured that stories from both companies remained fairly sanitary.

As the Sixties came to a close, there was a definite effort to amp up the "seriousness" in mainstream comics, and we eventually got...

This is the point where folks find it harder to agree on a clear beginning.  I'm a pretty big Green Lantern fan, so I'll go with the issue above (dated April 1970), when GL is joined by Green Arrow, and their clashing philosophies lead to an exploration of turmoil across America.  Some people would probably point to Jack Kirby leaving Marvel and beginning his Fourth World saga at DC as a turning point, and others might even push the beginning of the Bronze Age back as far as Gwen Stacy's 1973 death in the pages of The Amazing Spider-Man.  Comics got a little bit darker and...one of the key buzzwords for the era...more "relevant."

The Comics Code was changed in 1971 to allow horror comics to thrive again.  Also important for readers of this blog, some of the most important fantasy comics in history came about during this era, with Marvel starting to publish Conan in 1970 and DC following with the pulpy Lost World adventure The Warlord in 1975.

Eventually, this superheroic seriousness (which I would argue began with the tone Marvel established in the 1960s) came to a head with full-on deconstruction of the superhero genre and a rejection of many ideas grounded in the optimistic Silver Age.  We moved into...

Now, this is where things get really hazy as far as starting points AND names of the Age.  Some will call this the beginning of the Iron Age, some will call it the Dark Age.  I think I've seen the Adamantium Age used, as Wolverine came to prominence during this time.  I'm feeling pretty clever in calling it the Antiheroic Age, although that's probably been used plenty of times.  I like the idea of following Hesiod's five ages, in which the Bronze Age is followed by the Heroic Age.  In superhero comics, however, it was the antiheroes who ruled this era.

In 1985-6, we got Watchmen, The Dark Knight Returns, and Crisis on Infinite Earths.  The Silver Age multiverse was no more in DC Comics, and we saw heroes' flaws step to the forefront.  Marvel began their more serious and realistic New Universe and carried the themes over to their main universe with books like New Mutants.  The Punisher and Wolverine stepped up to Tier 1 antihero status.  Eventually, the era progressed/degenerated into the formation of Image Comics, the rise of Rob Liefeld (whose work I appreciate, by the way), and the proliferation of badass supers like Spawn, Venom, Cable, and Deadpool.

Even as the Antiheroic Age was taking place, it was being lampooned in the pages of comics like Lobo.  What happened next is interesting...a rejection of the rejection of Silver Age themes...and a move into what might be called the Modern Age, the Neo-Silver Age, or... 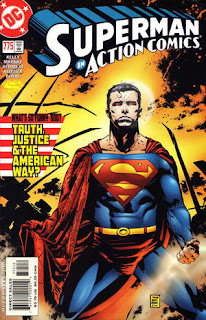 Superhero comics certainly maintained a great deal of diversity as the Antiheroic Age came to a close, but slowly, a return to embracing the ideals of a previous era began to make its way through the industry.  Some key transitions were Grant Morrison's run on JLA (which returned the team to a "Big Seven" format), Mark Waid and Alex Ross's Kingdom Come, Kurt Busiek's Astro City, the start of the Ultimate Marvel universe, and the gem pictured above.  Joe Kelly's 2001 story "What's So Funny 'Bout Truth, Justice & the American Way" is a straightforward indictment of the dark age preceding it and a call to appreciate what made us love superheroes in the first place.  (This story is nicely retold in the animated feature Superman vs. the Elite.)

So why do I feel comfortable calling this the true Iron Age?  Well...it follow's Hesiod's chronology that way, for one.  Also, something crucial that happened during this age was the rise of the superhero film.  While there was plenty of darkness to be found in the leather of the X-Men and the Dark Knight saga, one could argue the crowning achievement has been the success of the Marvel Cinematic Universe, kicked off in 2008 by Iron Man and filled with Silver Age-y superheroic fun.  So, the Iron Age sounds good to me!

Which brings us to now.  2016.  Looking back over the ages as I've subscribed to them, we see a new era of superheroes beginning around every 15 years.  So, that would put us in a transitional period right now.  What is this new age going to look like?  I suppose we'll have to wait 15 or so years to get a good idea of that, but I'm curious to know if anyone reading has some ideas on the matter.

Personally, I'm hoping this moment isn't the key to kicking off the era:

Time will tell.
Posted by Jonathan Linneman at January 22, 2016