Uh, I think I'm really starting to like this Fifth Edition thing...

I'm not really sure why I've been so slow to embrace D&D Fifth Edition.  I mean...I've paid a fair amount of attention to it and tried to learn a bit about its ins and outs.  Long, long ago, I had this idea that I wanted to hack it for superhero gaming, so I started to learn the core of it (relative to the versions of D&D I had played).  I even put together a little microlite version of it that I think is both very flawed and very much playable with the right DM.

But I still didn't play 5e.  That 5e supers idea was ultimately replaced by Light City, a superhero hack using Swords & Wizardry Light as the base.  And while, like so many of my projects, I eventually let Light City wither (although I'd still love to revive it!), I did make some stuff that I found to be fun, using a system that I was simply more comfortable with and excited about.

I picked up the 5e Starter Set at one point, still with the thought of immersing myself in the mechanics for an entirely different minigame-type project that may one day see the light of day.  I enjoyed what I read of it (especially with its inclusion of Lost Mine of Phandelver), but never really did much with it.  I just didn't need it.  I have old D&D, OSR games, and all sorts of non-D&D games I can play.  Why bother with this new one? 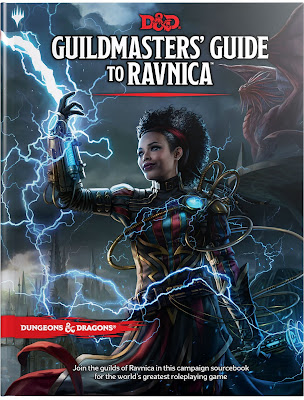 It was with the publication of the Ravnica sourcebook that the tide started to turn.  After working on Light City stuff, I've still been pretty attached to that WhiteBox/Light take on Swords & Wizardry.  I like the low HP, the d6-only damage, the single saving throw.  And it's really just the bones of a game...very much one that you can make your own in many different ways.  But with these Ravnica species at my fingertips...well, that's when I started thinking about taking 5e races and tacking them onto S&W Light-style classes.  It's an approach that works for me, and I've recently been settling into that mindset in tinkering with my own take on a Fantasy Heartbreaker.

But now, I'm about to play in a full-on 5e game.  First game I've played in that is absolutely, officially, wholly Fifth Edition.  I had recently picked up a Player's Handbook (once again, to familiarize myself more with the rules but without necessarily having the intention to ever play it as-is) and finally started looking through it with the eyes of someone about to use the book as it's meant to be used.

I was way too willing to dismiss 5e characters as too complicated for quick generation before jumping into an adventure.  I think the formalization of character backgrounds seemed unnecessarily sprawling to me...when in reality, it's probably the best part of 5e for creating the sort of game I want to play in.  Not to mention that I'm sure there are some easy ways to approach those a little differently, giving players more freedom in telling their characters' stories while ensuring there's no sacrifice in power.

Sure, some of the classes are certainly more complicated than the ones you get in a game like Swords & Wizardry, but the old D&D standbys...well, they really don't seem much more cluttered than a typical class from most OSR games.  Heck, Vancian spellcasting isn't even totally Vancian anymore; this is a detail that had completely escaped me...because I guess I always skipped over spellcasting rules, assuming I already knew how they worked!

Kinda crazy that this is such a revelation for me this late in the game.  While the old school will certainly keep a prominent place in my heart (I'm still in the midst of an AD&D game and loving it), I expect to start thinking about and looking for chances to play 5e a lot more.  Maybe it turns out that my Fantasy Heartbreaker is actually just something along the lines of the Starter Set.  Meaning...no heartbreak actually needed...