Fair warning:  There's a lot of thinking out loud in this post as I muddle through the details of putting together my own fantasy heartbreaker.  Please read on only if that's your bag...!

First things first for this post:  It's time I decide what classes to include in this fantasy RPG that's all been done before that I'm putting together.  I'm definitely going with the "big four," as seen in games like Swords & Wizardry Light by one name or another - Wizard, Cleric, Warrior, Rogue.  (Side note:  I'm pretty sure I'm especially drawn to that nomenclature because those are the classes used in Magic: The Gathering's "party" mechanic...)  So...what else?

I mean...this is MY heartbreaker, so I can put in whatever ridiculous niche class I want to just because it makes me happy to think about having it at the core of the game.  At the same time, this whole exercise has grown out of a desire to have a very basic fantasy RPG structure to build my other projects around.  I do want to keep things simple.

The problem is that once I take the simple step in my mind of "allowing" one class or another to creep into the lineup, it becomes too easy to think, "Well, if I include a Warlock, surely a Shaman fits.  And then it would be ridiculous to not include the even more iconic Druid, and if there are Druids, why not Rangers, and then of course Paladins, and then...and then...and then..." 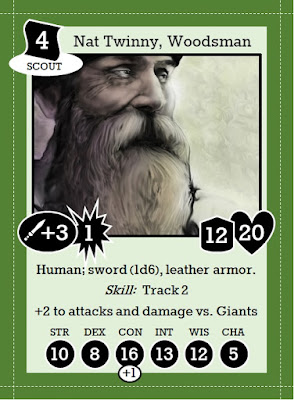 Back in 2017, my humble offering to the gaming world on Swords & Wizardry Appreciation Day was a set of alternate classes for Swords & Wizardry Light (which you can download HERE if you're so inclined).  They were streamlined a bit (yeah, even more than the usual!) in order to fit the Dungeonstack card game project that was the focus of my attempt at the A to Z Blogging Challenge that year; I'm noting them now because I picked out five basic roles, going with the names Warrior, Mage, Priest, Rogue, and Scout to differentiate them from the standard classes.  Scout was the "nature class," intended to make sure some bits of Druid and Ranger found their way into the game, as I've always been drawn to classes of that type...although the Scout is really just a Ranger stand-in without any real hint of Druid.

Lately, some form of Scout has seemed appealing as a single addition to the "big four" noted above.  An additional bonus is that Scout is the label that has long been given to Rangers in MTG, satisfying my inclination to defer to the naming conventions found on the magical cards.  However, with the coming Adventures in the Forgotten Realms expansion for MTG, Magic is making the Ranger creature type an official part of the game, SO...

Well, I'm dancing around it while thinking out loud, but I think my choice is becoming obvious:  The five classes of the Monstrous Heartbreaker shall be Warrior, Wizard, Cleric, Rogue, and Ranger.

Now...to nail down the specifics.  I covered the Warrior in my last post on the Heartbreaker and think I'll keep the ball rolling with the non-spellcasting classes.  Because the Ranger, while essentially a variant Warrior, can also fill the roll of "skill gal/guy" in a party, I think I should look at the Rogue first to get a baseline of what skillful characters look like in the game.  So, let's try statting up this guy... 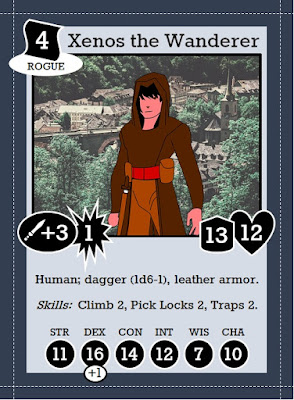 He was the first (and only, so far, although maybe I'll get back to it at some point...?) Dungeonstack Rogue.  Because the mechanics for the Heartbreaker differ a bit from what I was planning with the 'Stack, I can't quite use him verbatim, but I bet I can get something very close that can also be a model for writing up the Rogue class as a whole...