In the lingering holiday rush, I didn't quite hit Monstrous Monday with this post, but I wanted to continue looking at Eeveelutions for old school RPGs by hitting the next two to enter the Pokédex...Glaceon and Leafeon.

These two showed up in Generation IV of the Pokémon games, adding Ice- and Grass-types to Eevee's evolved forms.  As with all Eeveelutions, they're as cute as they can be.

Leafeon is especially interesting to me, as it's depicted as a sweet little nonconfrontational, tree-hugging critter, with Pokédex entries like:

When you see Leafeon asleep in a patch of sunshine, you'll know it is using photosynthesis to produce clean air.

It basically does not fight. With cells similar to those of plants, it can perform photosynthesis.

So it basically does not fight, which is pretty cool...oh, I guess except for the times that it's forced to fight in a ridiculous bloodsport by the humans who hold it captive, which is, y'know, the entire point of the Pokémon franchise.

Here are the Glaceon and Leafeon entries at Bulbapedia, and here they are in simple forms for old school games... 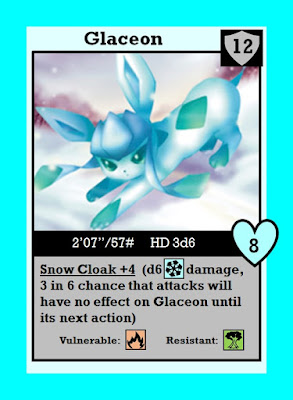 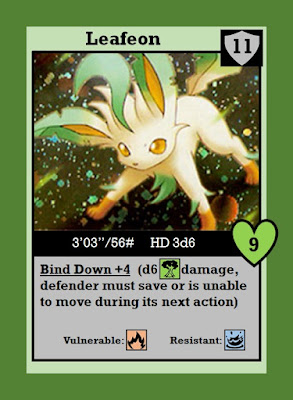 (As always, I get these icons from the awesome site Game-icons.net, which has tons of amazing bits of art to use in games, completely free of charge!  These cards are proportioned such that they can be printed out at 2.75"x3.75", with 1/8" then trimmed around the edges to bring them to standard poker size.)

Posted by Jonathan Linneman at December 27, 2016