I've noted before that I'm a huge fan of card games and put some thought into a little dungeon-crawling game based on The Black Hack (which I plan to continue...at some point...when life slows down a little...sometime...).  The precursor in my brain for that effort was the idea of making a card game built upon the rules of OSR RPGs.  I fiddled with it a little when I worked on my contribution to the Tenkar's Landing crowdsourced sandbox setting spearheaded by Erik Tenkar of the well-known Tenkar's Tavern.  In that, I focused on an OSR class that was a monster summoner and spellcaster using a deck of cards to perform her magic.  Again, that's something which I plan to continue...at some point...and so on...

Lately, I've been running a more general OSR card game idea through my head, and since I like to brainstorm these things here in blog form, I'm...well, going to do just that... 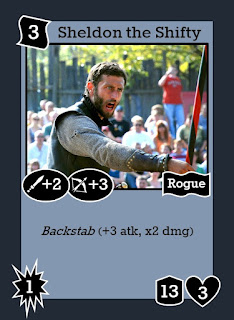 I want to make a card game based upon old school fantasy RPG rules.  You can take a card and use it as an NPC.  You can take an NPC and make a card out of them (probably tougher than the first thing, but maybe I'll get there).  I don't want it to be too complex...just something that can satisfy a card game craving while giving the OSR itch a little bit of a scratch (which actually sounds kind of dirty).

I'm just gonna shotgun some ideas for the structure of the game.  It'll be based on Swords & Wizardry rules.  Specifically the Core rules.  Why?  Well, everybody like Swords & Wizardry, right?  Playing the game will involve enlisting henchmen and hirelings to battle against those of one's opponent(s).  The "cost" of a character can simply be its level...perhaps each turn, players will roll 1d6 and be able to summon that many HD in hirelings.  And maybe dice can be saved from one turn to another, to build up to more powerful characters.

The hiring, though...that will come after battling for the turn.  Some tried and true CCG combat concepts should serve us well here.  Attack your opponent's henchmen, or hold your guys back so they can block when you get attacked.  Depleting the deck is a solid win condition, right?  So, yeah...you can attack your opponent's "base," and if they don't block the attack, the damage dealt causes them to discard from the top of their deck.  Run out of cards, and you lose.

Okay, this is a solid base to build on!

I think tracking damage is going to get a little messy for all of those characters.  So to simplify that, let's deal only in HD and damage dice rather than variable die sizes.  (This is part of what I've tried to do with the GRIND).  Eliminating any of the rules involving little pluses and minuses to hit points and damage should be easy enough.  And d6-only hit dice and damage (or multiples thereof)...that's pretty old school, right?

Of course, if I'm basing this on S&W Core, I should probably work out some new classes that fit the style of both the RPG and the card game I'm building.  Here are the first notes I have for this (the increased attack bonuses are a personal preference...):


Backstab: If Rogue hasn’t acted this combat and first attack is on character that has already taken an action this round, gets +3 to attack roll and deals double damage (triple at level 5, quadruple at level 10)
----------

I'll work on magic later.  This is enough to get me playtesting.

Throwing together extremely basic playing card layouts is a method of relaxation for me.  I have little in the way of skill or training...but I love playing around on PowerPoint.  I made a couple that might work for this little game.  The first one (Sheldon the Shifty) is the one I posted above to break up the monotony of all these words I'm putting down.  Here's the other one: 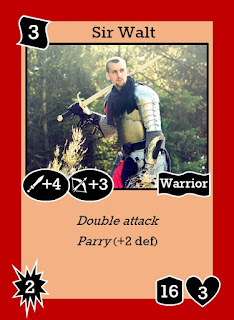 And then there's the cardback.  I like Henchmen & Hirelings as a working title, so here's something I can work with there... 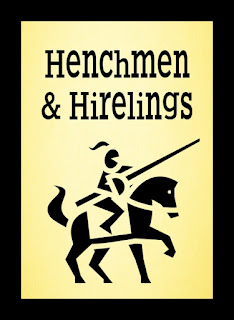 If you've actually read through all this (or...some of it)...thank you!  I'd love to get some outside thoughts on it.  There will hopefully be more to come...maybe sooner, maybe not sooner...
Posted by Jonathan Linneman at September 16, 2016