Monster Monday: That giant statue that fought the Challengers of the Unknown

It's #MonsterMonday.  Time for another Kaiju of the Silver Age...

Two weeks ago, I posted about Giganto, the first monstrous foe of the Fantastic Four.  Today, I'm going back in time a little, to a team that many fans think of as an obvious influence on the FF...the Challengers of the Unknown.  Similar to Reed Richards and crew, the Challs are a foursome of Kirby-created, jumpsuit-wearing adventurers who find themselves teaming up against drive-in movie villains after nearly dying in an accident.  They first appeared in 1957's Showcase #6, just two issues after Barry Allen ushered in the Silver Age of Comics.  And in their very fist recorded adventure, they encounter this guy: 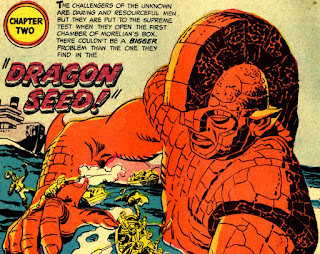 You see, the Challs are offered a million dollars by a sorceror named Morelian to open an ancient box that he possesses.  The first thing they find is a big old egg... 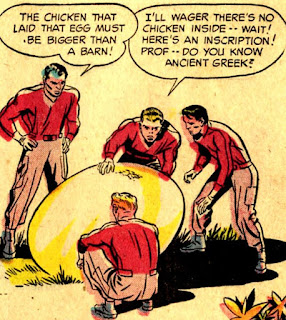 The next morning, they find that the egg has hatched, but they don't know what emerged.  It doesn't take long to find a clue... 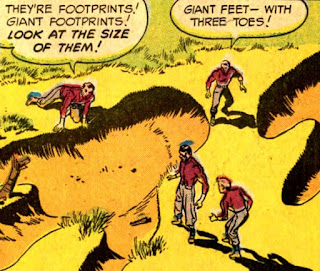 ...and then, almost immediately, the monster itself... 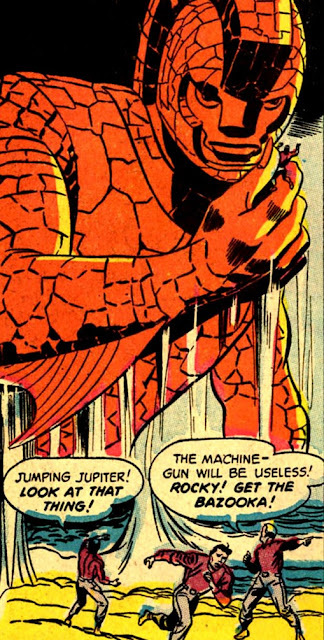 Now, I was inclined to think this big guy was inspired by the bronze giant Talos as encountered by Jason and the Argonauts in the classic film.  The comic was about six years too early for that, though, so I guess it makes more sense for it to take inspiration from the Colossus of Rhodes.  Maybe...?  At any rate, it's really strong.  Like "nuke it and not even do any damage" strong... 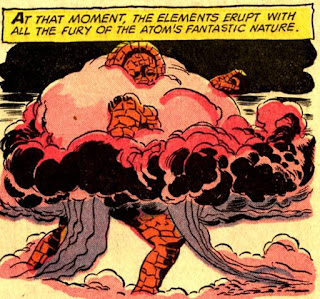 The Challs do defeat it, of course, and it's one of those little Silver Age DC Comics resolutions that can either seem cheerfully clever or painfully anticlimactic, depending on how you're feeling that day.  I don't necessarily want to spoil it, but feel free to ask if you'd like to know how they take it out.  (Oh, and even after beating this monster, there are several pages of story for the heroes to work through.)

Email ThisBlogThis!Share to TwitterShare to FacebookShare to Pinterest
Labels: Challengers of the Unknown, comics, kaiju, Kaiju of the Silver Age, Monster Mondays