For this weeks #MonsterMonday, I'm going to hit on a slightly different Kaiju of the Silver Age.  This isn't a monster that inhabited a mainstream superhero universe, but one that held down its own title for a while during the silver '60s:  Reptisaurus!

In 1961, Charlton published two issues of a comic based on the Danish/American kaiju film Reptilicus (there are apparently versions of the film in both Danish and English). 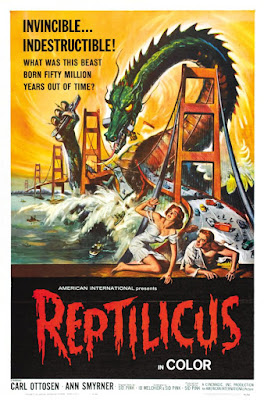 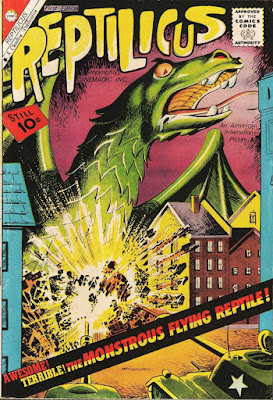 After losing the license, they turned him red and continued the series as Reptisaurus, where it lasted for another six issues and a special edition.  He even made an appearance in Charlton's comic series featuring the monster Gorgo (whose mother appeared here on a previous Monster Monday). You can read a good summary of Reptisaurus's backstory over at the Public Domain Super Heroes wiki (yes, it seems that Reptisaurus has fallen into the public domain!) or in the first issue of the series that holds the title Reptisaurus.  To really summarize, an ice age sent a pair of Reptisauruses (or...Reptisauri, if you prefer) into a deep hibernation in a warm volcanic area.  And then...well... 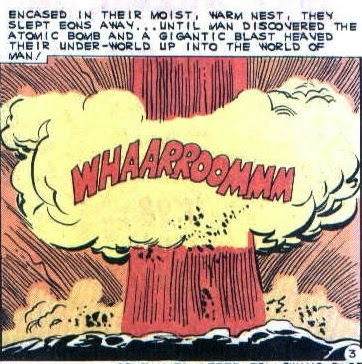 Isn't that always the way?

Luckily, Reptisaurus seems to be a bit more helpful than his inspiration Reptilicus.  Instead of introducing himself by destroying Copenhagen, he helps to fight off an alien invasion. 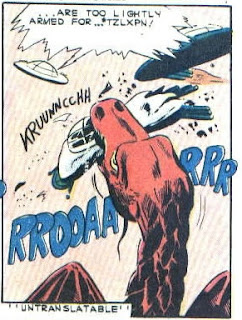 I like to try to at least guesstimate a size on these big guys.  According to this wiki entry, Reptilicus was around 90 feet (27 m) long.  I initially thought the Reptisauruses were meant to be bigger than that.  Here's an establishing shot with what may be a blue whale... 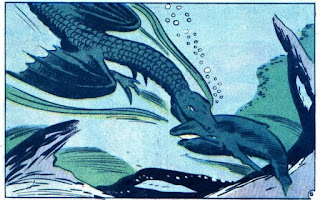 ...which would make me want to put it at well over 100 feet.  But...who knows?  That 90 feet may be a good guess, as we also get shots like this that make it seem pretty reasonable:

The perspectives I've seen just make it difficult to judge.  Could be a small plane and a small blue whale, after all.

If you're interested in reading more about the history of this beast, there's a very good writeup to be found at this link.

Thanks for checking this guy out!  I'm really enjoying covering these four-color monsters and hope you'll stop by again next week for another Kaiju of the Silver Age!
Posted by Jonathan Linneman at September 12, 2016