Christmas is almost upon us!  My buddy Josh was kind enough to indulge me in running through this deadly little adventure that I wrote a few years back: 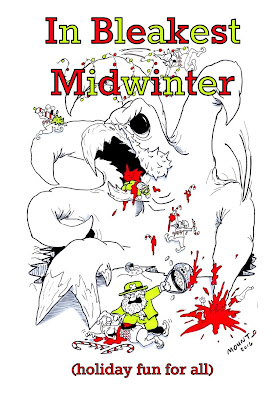 We started him out with a six-elf team on the mission to save the kidnapped Baby New Year, but the initial leprechaun encounter (oh, uh...spoiler alert!) made it clear that he should go ahead and call in some reinforcements.  Six of the twelve total made it through to the end...which is pretty much on par with the level of deadliness I'm going for with the adventure.

I think that by next year's holiday season, I'd like to put together a revised/expanded/improved edition of In Bleakest Midwinter.  It was written pretty loosely as a funnel-type activity that can be played with whatever system and approach to character creation you can make work, although it does have a very basic system in place, with the assumptions of that system outlined.  At any rate, I'm wondering if it might benefit from a little more rules density, even if it's just a bit of silly holiday "rules dressing" that's interesting to read.

I guess I figure there are probably three main categories of folks who are going to get something valuable out of a small work like In Bleakest Midwinter.  There are those who will just want to read over it for fun and/or inspiration, most of whom would probably benefit from additional rules text, as long as it's evocative and not just a grind to read through (or skip over!).  There are some who will want to run it in their system of choice, most of whom will be just as likely to do so having to convert a little bit of crunch as they would be having to add on their own bit of crunch.  And then there are those who will want to run the game exactly as written, and I could probably have added a lot more to make the adventure interesting for those folks.

All of this has me thinking about Santa's Elves, and about the idea I threw out there recently of using D&D 5E races in White Box-style games.  I like the idea of approaching the elves in the game like a 5E race...there are enough specifics in 5E rules to give some nice flavor, and they can almost certainly be crafted to not be overpowered in the context of the adventure.

What?  Oh, yes, I am essentially thinking out loud.  I appreciate your reading.

I also hope you have the absolute happiest of holidays, by the way!

Now, off to look over 5E gnomes.  After all, that's what Santa's Elves are, aren't they?

Posted by Jonathan Linneman at December 24, 2020