The Adventures of B.J. Flech 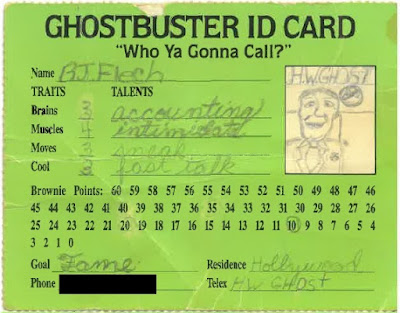 In the first session of a new campaign with my friend Josh, B.J. and his partner Johnny Fix headed to 1990 Norfolk, VA, to see what shadowy shenanigans may be in store for the 8th Annual Fourth of July Great American Picnic & Fireworks.

It was a giant picnic, so naturally the threat was a colony of giant ants.  Overall, I'd say it was a success.  I mean, it's still up in the air how the ant problem is going to be solved, but when your game session includes things like a character riding on the back of an ant as it carries a huge bag of hot dog buns stolen from a food truck back to its colony, I figure you're doing something at least a little bit right.

As I mentioned last time, the game is a bit of a mashup of Ghostbusters and Urban Arcana.  I'm enjoying playing with some rules here, as the base is mostly a houseruled version of the GB RPG, but I want to pull monsters from D&D and D&D-based RPGs and use their stats meaningfully in this game (I pulled the ants from Basic Fantasy Role-Playing Game).

Ultimately, I think I might want the focus of the setting to be on an organization that feels a little more like the Ghostbusters than the X-Files, but for now, Flech and Fix are agents of the D20 Modern staple agency, Department-7, as taken pretty much directly from the Urban Arcana SRD.  There's still a lot to explore here.  More to come as I make my way through it...!
Posted by Jonathan Linneman at June 25, 2020