D is for Dogwood City

I'll make this one quick!  The world of Light City, and really the project itself, is a pretty natural extension of the the trip through the alphabet that I took on this blog two years ago, when I made my first attempt at constructing a superhero setting out of public domain characters.  The focus that year was Dogwood City, based in my mind upon the large southern city that I lived in at the time.

I guess I sort of fell in love with the process, because shaping the details of such a fictional world in my head has become almost an addiction over time.  Seriously, I think about stuff like...oh, how different heroes' debuts should fall on a timeline a LOT more than you'd probably think someone should consider such "facts."  At least Light City is giving me a bit of an outlet for it now!

Anyway, there's really no reason that Light City and Dogwood City shouldn't be on the same map.  (In my little section of the multiverse, anyway...!)  Perhaps there'll be a chance to look at geography in a little more detail in the coming days.  For now, let's take a quick second look at the flagship hero of Dogwood City...Nature Man! 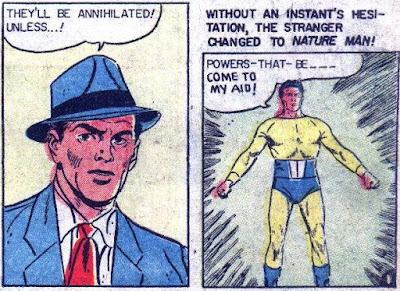 Oh.  Yeah, that was it.  That WAS the quick second look.  Maybe we'll take a slower look when the letter N rolls around.