About a month ago, I posted the classic Basil Wolverton story "The Brain-Bats of Venus" for #MonsterMonday.  +Justin Isaac suggested that some stats for the Brain-Bats would make for a good follow-up, and I had to agree.  (In fact, they probably should have been there in the first place...!)

Today, I finally make good on that suggestion! 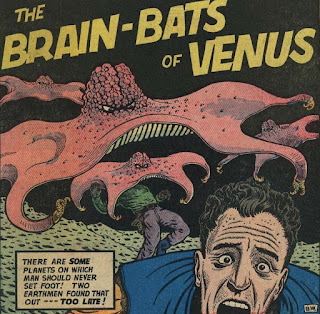 Venusian Brain-Bats are flying creatures with a width of around 6 feet and a pair of hooks at the tip of each of their fleshy wings.  They are vulnerable to Psychic and Electrical damage (taking double).

Sentient beings hit by a brainsmother attack must save or come under the control of the Brain-Bat.  While under this control, a creature finds that its thoughts and impulses are affected in addition to its actions.  Each time the Brain-Bat compels the being to perform an action, it may resist with a save, and it may perform actions of its own desire if succeeding at a saving throw.  After 1d4 hours, no more saving throws are allowed, and the effect ends only if the Brain-Bat is killed or removed from its victim (or leaves voluntarily).

And now...my favorite part for some ridiculous reason...here it is as an underground elemental beast.  Remember to collect 'em all to see who rules the monsterfighting pits...! 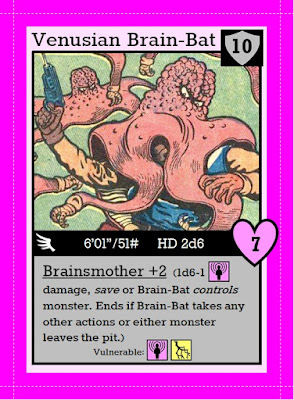 Posted by Jonathan Linneman at February 13, 2017