If you survey the comic book offerings of The Big Two publishers for a specific era, there are some niche comics that are sure to get lost in the mix, even if they figure into the main universe of the publisher.  DC's 1985 series Hex fits into this group, I think.  To be honest, it wasn't until the last few years that I was even aware of its existence.  I can't even recall seeing ads for it as a kid.  (I suppose its 18-issue run finished up around the time I really started getting into comics, so that's probably a big reason why, but it also...as you can see on the cover of #1 below...was published outside the confines of the Comics Code, which may mean that it was never found at the gas stations, drugstores, and mall bookshops where I got most of my comics.) 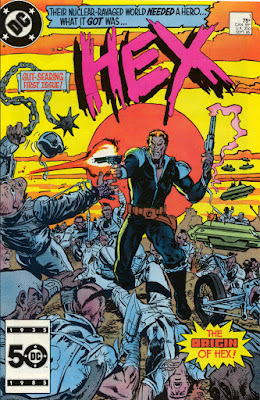 I managed to pick up a nearly-complete run of Hex for a good price a while back, and I've recently (finally) taken some time to read a couple of issues.  It's a pretty fun story, and I honestly think you'll have a good idea of how much you'll enjoy it based upon how much you like the premise.

IF you think the idea of western hero Jonah Hex transported to a post-apocalyptic future (by a madman obsessed with the warriors of the past) and doing his thing as a Mad Max-style antihero sounds like fun, you should check this series out (if you can find it at a decent price).

IF you think that idea sounds stupid, you should probably stay away.  (Also, what's wrong with you?)

Seriously, the series is described very appropriately by that tagline at the top of the first issue's cover:

THEIR NUCLEAR-RAVAGED WORLD NEEDED A HERO...
WHAT IT GOT WAS...
HEX

(Oh!  Along those lines, I think I've just figured out what my next high-concept RPG campaign is going to be based around...)


EQUESTRIA NEEDED A HERO...
WHAT IT GOT WAS...
HEX

Hrm.  Okay.  Anyway, yes, in the binary post-apocalyptic worldview, Hex certainly occupies the Mad Max end of the spectrum.  There are some scenes that could have been straight out of The Road Warrior:

(With everything comic-book-futurized a bit, of course.  Hey, this is a story about a time-traveling cowboy; don't expect Miller-esque gritty realism here...) 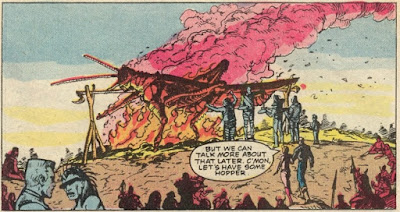 Honestly, the thing that might bug me (no pun intended, seriously) the most about the series is that we have to constantly contend with Jonah's accent and diction.  It just throws off the rhythm of the dialogue in my head sometimes.  There are places where it's fun, like this scene where Hex first encounters the wasteland gang known as the Road Reapers: 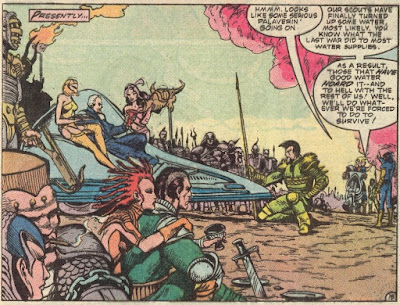 Other times, it's just a bit more jarring.  I might be alone in feeling that way, though.  And hey, it's kind of a Jonah Hex trademark, so what're ya gunna do?

Unless there's something I'm blanking on at the moment, I'd say that Hex competes with the Atomic Knights for the status of DC's secondary take on a post-apocalyptic Earth (behind Kamandi, of course!).  Jonah Hex as Mad Max really does work as a high concept, especially when one considers the similarities between the Western and post-apocalyptic genres.  It's been a fun comic so far and is an interesting slice of pop culture history, so I'm glad I'm finally giving it a spin.
Posted by Jonathan Linneman at January 18, 2017