On Giant Monsters (and Scaling D&D)

Funny how random events can guide the idle activity of one's brain.  My wife is out of town for the week, so I've found myself watching things that wouldn't get much play on the Linneman television when we're both in on the decision.  Earlier this week, that meant a healthy dose of Ultraman.  Eventually, Rodan also worked its way onto the menu.  So, when Justin over at Halls of the Nephilim posted today about kaiju in RPGs, I was destined to spend more time than I should thinking about giant monsters on the tabletop. 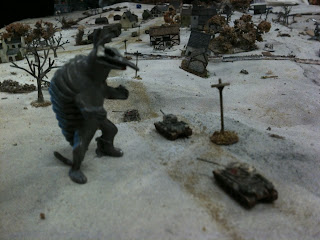 I've played around with some daikaiju rules based on West End Games' D6 System (it's free and open, y'all!).  One of the things that I really like about D6 is the straightforward way it scales attacks and damage...for every size category larger one object is than another, it becomes 1d6 easier to hit (the "broad side of a barn" effect), but resists 1d6 more damage.  I like being able to think about huge monsters, or mecha, or whatever, as just bigger versions of characters.  There's something unwieldly about having to give every giant monster dozens of d20s as hit dice.  Maybe that's part of the appeal...?  Maybe some players and GMs love the idea of chipping away at 500+ HP...?  That's entirely possible.

Since D&D and its many derivatives already venture into the territory of size modifiers, I wonder if there's an across-the-board fix that we could use in such icosahedral systems.  I think it'd be awesome to be able to run a campaign where everyone gets to play a daikaiju, but all the numbers are set to a scale that we're used to for PCs.  And then, when you want that campaign to cross over with your 5E adventuring party, you still have tools to make them work together.  I'd like to do it something like this (cue the pump-up music)...

First, we'd have to designate the size categories.  How about these...not too far from RPG "standards," I don't think:

We can then think of giant monsters in the same terms as as humans of that size.  Godzilla doesn't have to have 50 Strength or whatever in order to simulate what he/she (hereafter simply "she") can do.  How strong is she compared to what a 200-foot human would be?  On the really strong end?  Okay, 18 Strength.  How about HP?  I guess we'd have to do that based on a monster's "level"...and Godzilla's pretty legendary, so I'll just go with a flat 20 hit dice.  "Average" HD is a d8, so assuming Godzilla's of a hardier "class" (and has a pretty good CON score), 20d10+80 would give 190 HP, on average, which is still a little unwieldly to me, but not out of the range of high-level characters (and this is a high-level character).

And now for the modifiers.  The difficulty classes of d20-based games (and the D6 system, for that matter) have nice increments of 5.  To my (fairly untrained) eye, +/-5 actually seems like a reasonable modifier, per size category, that could be used in a number of situations.  A human attacking Godzilla (5 size categories larger) would get +25 to hit (c'mon, it should be a piece of cake to hit that bigass lizard)...but then counter it by giving Godzilla damage reduction of 25.  (I know 5E has eschewed damage reduction in favor of resistance, but this seems like a situation where it'd work to bring it back!)

Conversely, if you arm King Kong with a King Kong-sized sword, he might get -10 difficulty trying to land a blow on a pesky little human (2 categories smaller), but every time he does, there's +10 damage.  You could probably even use the same modifiers for checks of Strength (easier when you're bigger) and Dexterity (easier when you're smaller).

I realize there's nothing revolutionary in this...I'm just a little surprised I haven't seen this used (or, used more...?).  I don't think there's anything absolutely game-breaking in the hands of a good GM, but maybe I'm missing something big.

Email ThisBlogThis!Share to TwitterShare to FacebookShare to Pinterest
Labels: kaiju