A while back, in the midst of remembering Ivan Reitman, I wrote a little about rule conversion that hinted at the possibility of using 5E D&D as the base for a game intended to be about as streamlined as the old Ghostbusters RPG.  You could create a character pretty much the same way in either system just by determining attributes/traits and adding on some proficiencies/talents.  If it works for a pickup game of Ghostbusters, it should work for a pickup game using 5E rules, eh? 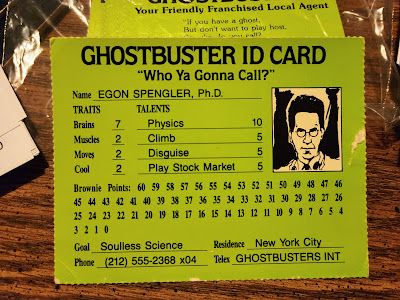 During this year's run of holiday gaming, I ran a Lovecraftian horror one-shot for Halloween and wanted to try out this streamlined approach to 5E as a universal system.  So, I just took 5E, added in a couple of modern skills and tools that might be important, and asked everyone to make a character using a Background only (or an equivalent set of proficiencies plus an extra roleplaying-based characteristic).  Sanity was tracked like hit points, and everyone rolled both that and HP (instead of maxing out at "1st level") to keep things tense(?).  I had come across at least one example on the net where someone discussed setting up a 5E funnel with background-only characters, and this seemed like it should work just as well.

For the adventure, I modified and quickly converted the Call of Cthulhu convention module Dead Boarder to take place at Miskatonic Community College on Halloween 1985.  (Note: I definitely recommend this scenario, as it's a pretty cool and easily adaptable Lovecraftian romp, and its convention-game focus helped us keep a one-shot as an actual one-shot, which we sometimes have trouble with...!)  And honestly, I think it went pretty darn well.  Background-only 5E gaming may just become a go-to for themed one-shots I want to try out.

I mean, when players come to the game with characters like the one below, how can things go wrong?  Quick creation...just enough substance to care about the character through a single session...defaulting to 5E rules that we all know reasonably well...I realize there's nothing groundbreaking to this approach, but I was really pleased with the outcome.  Here's Rachel's character, sharing without her knowledge or permission or anything like that but I really don't think she'll have an issue with it...

Background Feature: Knows Where the Bodies are Buried - For the campus where Milt works, he knows where every employee (staff and faculty) keeps their files and important papers and can access them at any time (licitly or otherwise).

Posted by Jonathan Linneman at December 11, 2022