Halloween gaming sure seems to bring a lot of joy within RPG circles.  While I've long enjoyed the idea of it, I've rarely, if ever, been able to take part in a dedicated Halloween game.  And lately, my gaming opportunities are very few and far between.  So...when my buddy Ted asked if I'd be willing to run the old Ghostbusters RPG for some folks this past Sunday, I blocked out the time from my work schedule and made sure I'd be able to get in on the fun...!

If you aren't familiar with this RPG classic, you should go check it out...like pretty much right now.  I'm not convinced that it isn't the greatest RPG ever made.  (How's that for an awkwardly hedged grand statement about the game?)  It's almost certainly one of the best introductory games out there, and it seems to have a lot to engage experienced players, as well (although minmaxing types will be greatly disappointed...).  Over at the Nerdy Show, they're really doing their part to renew interest in this old gem...I'd definitely encourage you to check out what they have to offer if you'd like to get in on the fun.

So, the premise was to be that the players are a local Ghostbusters franchise building off the success the original crew had in the first film...that's what Ted was thinking, and it happens to be the jumping-off point plugged in the game itself.  I decided to set the game in 1987 and started brainstorming what sort of ghoulies they might face...really wanting to play up the retro vibe, I looked around at other '80s icons to see what might fit into a game.  Pac-Man's ghosts seemed like they could be a good fit, but I could never wrap my head around how to fit them into a nice adventure.  So what else could there be...killer Care Bears?  A jaunt into the Mushroom Kingdom?  I even thought about having the crew respond to the events of the greatest SF film of 1987.

However, I thought it'd be best if I could work some local flavor in as well.  And then, while picking up a rental car a few weeks ago, I saw this brochure on the rack displaying all the great stuff Georgia has to offer: 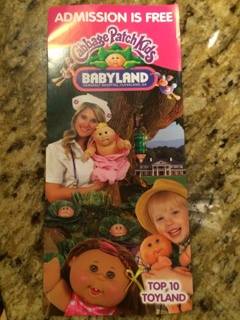 And with that, the decision was made.

(If you'd like more info on this special little house of horrors, you can check out its website or Wikipedia entry, or this nice little summary from Cracked last year.  I remember going multiple times as a kid...in its previous location, I guess it may be worth noting...and yeah, the place is weird.)

There's this demonic entity, you see, commonly referred to as The Nurse, or sometimes The Caretaker, whose existence is tied up in two things: caring for children, and making sure they eat their veggies.  And it's been hanging out in this cabbage patch in Cleveland, GA, pretty much unnoticed until some human flesh was improperly discarded by a lab worker at the nearby BioMedChemTech research facility (I used the intro from one of the adventures in the RPG's Operations Manual...).  And now it's building an army of babies that move at lightning speed and use what few teeth they have to take chunks out of unsuspecting folks in the area.

Or something like that.  But seriously, this is creepy stuff: 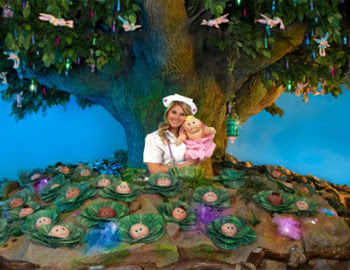 The other little retro nod I worked in was to give The Nurse a few guardian demons, for which I used some of my old toys from that set of plastic "dinosaurs" that's so well-known in old school gaming circles: 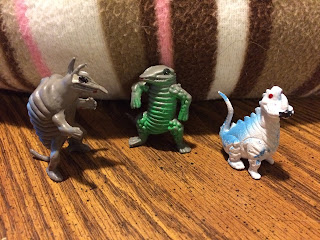 To head off getting too long-winded here, I'll just say that I. Had. A. Blast!!  (Hopefully the players did too...)  Can't wait to run Ghostbusters again...it'll go somewhere in the bottomless stack of games that I'd love to play but never hardly ever get a chance to (next up, though: +Justin Isaac's Slashers and Victims Light...can't wait to see what sort of killer he cooks up for use in my game...!).

Once again, the Ghostbusters RPG is highly recommended.  If you'd like the flavor of it in a different package, you can also check out the Ghost Hackers game I put together (based, of course, on The Black Hack).  The original can still be downloaded from Google Drive right here, and the "updated" (read: with all legal images) can be found over at RPGNow.

Now, everybody stay safe out there!
Posted by Jonathan Linneman at October 31, 2017