Considering that Light City currently occupies a prominent position in my gamer brain, I think it's time I start statting up some of the characters I've been going over in my head.  First up is a darling little heroine built using +Justin Isaac's excellent Super-Pet class... 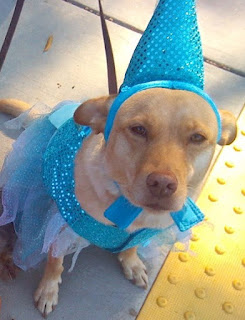 As a puppy, Celery was rocketed from her birthplace on the Yellow Planet to Earth to serve as a defender of Terran human- and caninekind.  Little is known of her early days on the planet, but she eventually found herself at an animal shelter in Georgia and was given the name Lydia.  Soon after being adopted by her unsuspecting foster parents, Celery's heritage as Yellow Planet royalty was revealed to her, and she began to tap into the powers granted by her alien physiology.

Celery works a job as a pet-assisted therapy dog, so she gets to spend a lot of time walking around and having people tell her how awesome she is.  This also helps her keep her paw on the pulse of her adopted hometown of Dogwood City and know where she is needed the most.
Posted by Jonathan Linneman at June 14, 2017