I'm not sure why consistent blogging is such a difficult thing for me to do.  I mean...it's probably the same reason that consistent anything is difficult for my ADD-inclined mind to keep up with, seeing as how I jump all over the place with my interests on a day-to-day (and sometimes minute-to-minute) basis.  Blogging does seem like it's a great fit for a brain like that, since I can literally write about whatever the hell I want on here and figure that someone with a similar interest may eventually come upon it.

For whatever reason, though, it doesn't quite work that way, and so I once again find myself a few weeks into a new year with a renewed interest in keeping up with this blog, but without the confidence that I'm actually gonna see it through.  While I'm here, though, maybe I can at least talk about some of the biggest deals in gaming, for me, over the course of last year...

First of all, in 2021, I finally dove into Pokémon GO.  It was late in the year, so I guess I was about...oh, 5.5 years later than the rest of the world in discovering how much fun this game is.  I did sign on a few years back and catch a few monsters, but my phone, data plan, and coverage in the rural area I lived in meant it didn't really catch my attention.

Of course, I've made no secret of my love for Pokémon, and so upon downloading the app to my new phone, here in crowded New Jersey...well, dang this is a good game.  There are just so many options to it...whatever your specific interest in Pokémon, you can probably channel it in Pokémon GO.  I'll admit that I enjoy the battling...y'know, the most ethically problematic aspect of the Pokémon franchise...but my biggest goal right now is simply filling out my Kanto Pokédex (especially evolving that Jigglypuff I've been holding onto since 2018).  Other than that, it's the augmented reality aspect of the game that might be the most intriguing.  Pokémon Snap is probably the coolest Pokémon title of them all, and the chance to take that photographic angle into the real world is pretty fun.

For example, here's my Houndour named Zuko, fitting in perfectly with the dogs of the Linneman household: 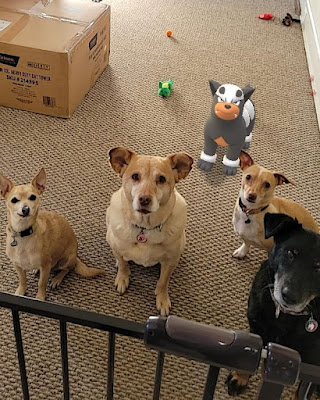 Here's Matty, my Alolan Ninetales, out enjoying the New Jersey winter with Celery and Tulip (and Laura and me): 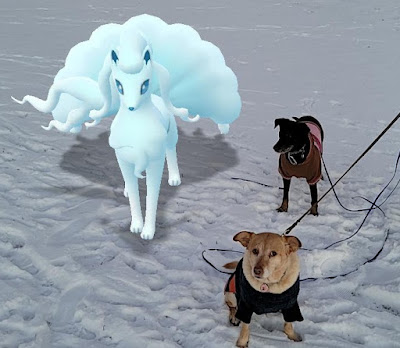 I work with a bunch of scientists, and one of them told me that picture is the nerdiest thing she's ever seen.  I take that as quite a compliment.
Speaking of work and nerdy pictures...uh-oh, is that a Flareon getting near the flammables cabinet...?? 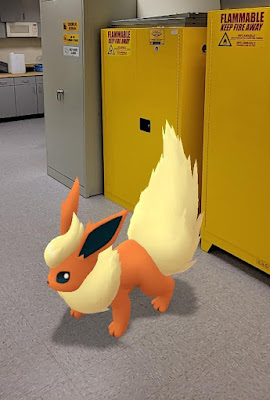 Of course, you might just have your pics bombed by other monsters, as this Smeargle did: 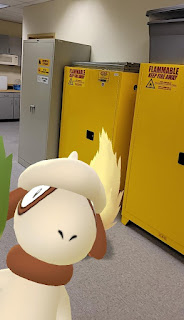 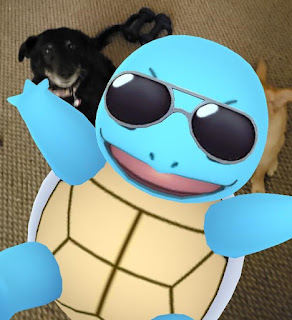 Ah, so...my buddy Zuko.  He snagged his 50th Houndour candy earlier this week, so while he looks like this for now... 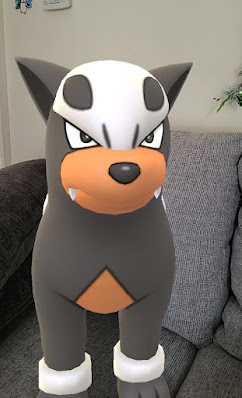 ...he will be evolving into a Houndoom soon.  My buddy won't be a puppy much longer.

I actually think that the setup of Pokémon GO fits perfectly with the theme of Underground Elemental Beastfighting that I've mentioned before on this blog.  Our world...with a hidden layer where people take these magical creatures captive and force them into battle...still seems like it's worth exploring on the tabletop.

Way back when, I had a little system for turning old Pokémon TCG cards into OSR monsters.  I think I'll continue that, although I'm in more of a multiple polyhedral mood now, and I'll make an adjustment or two since I'm looking at more recent cards that have been subject to the card game's power creep (and since some things just require ad hoc translation rules...).  Here are the latest editions of Houndour and Houndoom (I think): 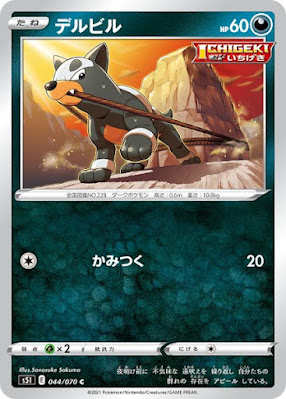 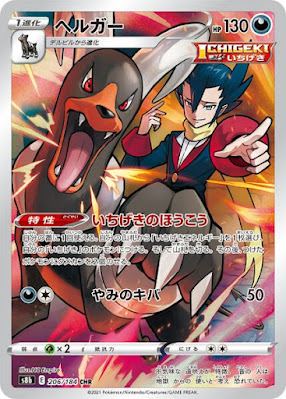 Houndoom
3 HD (13 HP), AC 12
Attacks:  Darkness Fang +4 (1d10 damage)
Training: Single Strike
Weakness: Grass
Single Strike Roar: At the beginning of each combat round, you may choose one of your monsters with Single Strike training.  That monster takes 2 damage and gets +1 to all attacks for the rest of this combat.
Posted by Jonathan Linneman at January 30, 2022