As I often do a lot more than is beneficial to my life in general, I've been pondering a game setting lately that may or may not ever make it onto a table or screen of mine.  It's based on a sort of nostalgia for a specific era, but mostly influenced by properties that I wasn't actually all that into during that era...it's only later that they've come to be representative of that time for me.  Wow...that was convoluted...

Okay, let's start with TRON.  I was aware of TRON when I was a kid, had an action figure, may have even played the arcade game...but I don't think I actually saw the movie until I was an adult.  I love (or at least very much like) the film now, though, and its aesthetic is as representative of the 80s for me as G.I. Joe, He-Man, or any of a number of other universes that I was deeply immersed in at the time.

Similarly, I didn't play classic roguelikes back when they were first breaking ground in computer gaming (although I did play the also-classic and at least superficially similar Castle Adventure as a kid).  Over my adulthood, however, I've gained a great respect for the genre and the devotion shown by its fans, and the ASCII art (especially representing D&D-esque fantasy) has also taken on a certain nostalgic feel for me.


I've come to love the idea of combining these two themes...the "Inside a Computer System" trope of TRON with the old school dungeoncrawling of Rogue...into a single retro-tinged game setting.  Now, I'll note that from what I know, Fantasy Flight Games' Virtual setting from their Horizon line of d20 books did this in a way, reskinning a lot of D&D 3.5 elements as being possible due to taking place inside a computer where all sorts of "magic" is available.  So...I should maybe pick that up at some point to make sure I'm not ripping things off too directly.

I really think the aesthetics are a big part of this for me.  I like the idea of maps' being built on the ASCII template of the game, and even as you zoom in to smaller scenes, maintaining the retro character feel.  So, I could take freely available art like this goblin/imp...


...and use an ASCII art generator to generate flavorful art for the game... 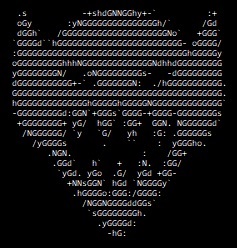 I suppose this might get repetitive after a while, but I think it could also do really cool things for immersion.

There are so many directions a story set here could go, as well.  I imagine it being a TRON-style world of apparently sentient programs existing within a computer, and somehow - either through their own natural evolution of sorts, or from influence by roguelike games - the programs are in this retrodigital, pseudomedieval world full of multilevel dungeons.  Maybe that's what "the Grid" gets called here: the Dungeon.  TRON's users - humans who interact with the grid - could be called Rogues in homage...and there are probably some fun options that play with the fact that the @ symbol traditionally represents the protagonist (and other human characters).  Perhaps some are true Rogues...some are actually nonsentient programs that can pass a Turing test...I dunno, seems wide open, honestly!